On March 16, the $70 million South Medford Interchange project went to bid, after more than seven years of development on the Rogue Valley’s largest state highway project since Interstate 5 was built.

A joint venture with the City of Medford, the project is designed to improve safety and reduce congestion. The centerpiece of the project is construction of a new interchange 1,900 feet south of the existing Barnett Road exit (exit 27). The new interchange design is called a single point urban interchange (SPUI), which handles large volumes of traffic.

Peripheral construction work began in February with tree and brush removal. Nearly 200 trees and brush near the Bear Creek bridges on I-5 needed to be removed before interchange construction could begin.

‘The tree and brush removal was started before birds can nest for the season,’ said Technical Services Manager Joe Squire. ‘Some of the trees, such as Cottonwood and Ash, will be used for wildlife habitat in the Rogue Valley and site restoration once the interchange is complete.’

The SPUI is located close to Bear Creek, so additional bridges are needed to accommodate the interchange.

‘This is quite simply the largest project many of us have ever worked on,’ said Area Manager Art Anderson. ‘The plan sheets alone for this project are about 800 pages.’

A project Solution Team and Citizens Advisory Committee worked through more than 20 different concepts to develop the best design. The Highland Alternative was identified as the preferred alternative.

‘The development process took a lot of time but we needed that time to make sure we got it right,’ said Project Leader Debbie Timms. ‘A project like this changes Medford and the surrounding area just like construction of the interstate did back in the 1960s.’

According to Project Information Specialist Gary Leaming, a video is available on the project web site, www.smedfordinterchange.org, which shows how the SPUI operates.

‘We want the public to know as much as possible about the new design,’ Leaming said. 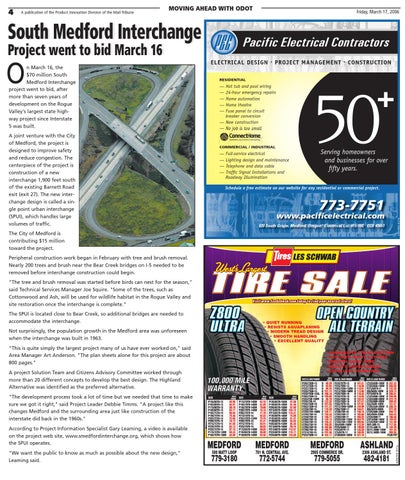