Two years ago this spring, the North Medford Interchange project broke ground. The $36 million modernization project was designed to make safety and traffic flow improvements to the east side of the Interstate 5 interchange (exit 30) that links I-5 and Oregon Highway 62, which is also known as Crater Lake Highway.

Originally scheduled for completion in October 2005, project delays have pushed the final stages into this spring.

‘While major work was completed by the end of last October,’ said Project Manager Joe Thomas, ‘there’s still some work that needs to be finished.’

The remaining work is focused on Biddle Road. The contractor, J.W. Fowler of Dallas, Oregon, will finish widening Biddle Road, as well as complete curbs, sidewalks, driveways and landscaping along the road.

‘We had to wait for better weather so we could go ahead with final paving and striping,’ said Public Service Representative Bill Boyett. ‘We’re hoping to wrap this up as quickly as possible.’

More than four years of planning and development went into the project. When the north Medford interchange was opened in 1962, the surrounding area was undeveloped. Biddle Road and Highway 62 were not grade separated until 1967.

The initial construction stages widened the bridges on Biddle Road and Highway 62; removed the Medco Haul Road over crossings; and built new on- and off-ramps for northbound I-5 traffic. Poplar Drive was reconstructed and a new, signalized intersection was installed for both Fred Meyer and Poplar Square.

A retaining wall was built for the northbound I-5 off-ramp. During development, members of the Citizens Advisory Committee wanted an aesthetic element added to the interchange since it serves as a gateway to Medford. ODOT brought forth ideas, and with the volunteer services of Carmine Petretto of Jacksonville, a design of salmon, cattails and sugar pine was incorporated into the wall.

You can view the North Medford Interchange project via the Oregon Department of Transportation’s travel information web site, Tripcheck.com. 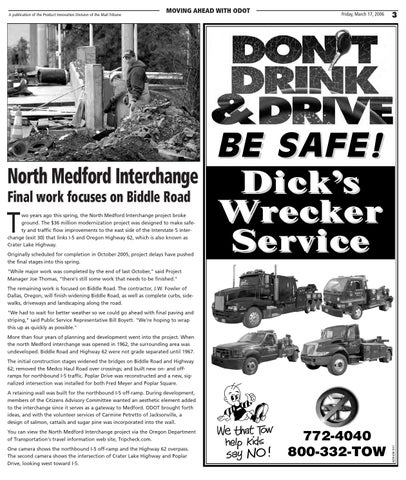