Repairs are underway on more than $3 million of winter storm damage to drainage systems along a five-mile stretch of Interstate 5 near the Siskiyou Summit.

The combination of flash floods and four landslides on December 30 closed I-5 for a 16-hour period during peak holiday traffic. While lanes were reopened the following morning to move traffic, it became clear repairs would take weeks if not months.

ODOT maintenance crews focused on pushing debris, including mud, trees and rocks, off the travel lanes to reopen I-5. Dump trucks were later used to haul the material off the shoulders.

‘Our crews worked around the clock clearing debris off the highway so that we could get the lanes reopened for people,’ said District Manager John Vial. ‘Most all our crews worked straight through the holidays and weekends without a break.’

The sheer volume and speed at which the material rushed down the mountain shredded the system of pipes, culverts, channels and inlets that provide drainage during the winter season. From milepost eight to 13, the broken pavement looked like peanut brittle.

‘I’ve never seen anything like it,’ said Vial. ‘It’s as if someone had taken a large ice cream scoop and worked over the mountain.’

According to Vial, highway shoulders around the region were damaged by the storm, leaving vertical drops at the end of the pavement. On the Siskiyou Summit, the drop off is as deep as 6 feet off the shoulder.

ODOT made a request for federal transportation money to help cover the repair costs for storm-damaged highways.

‘We’ll be working all summer to repair the damage,’ Vial said. ‘We’ve still got a couple months of rain ahead of us, but we’re hoping the worst is behind us.’ 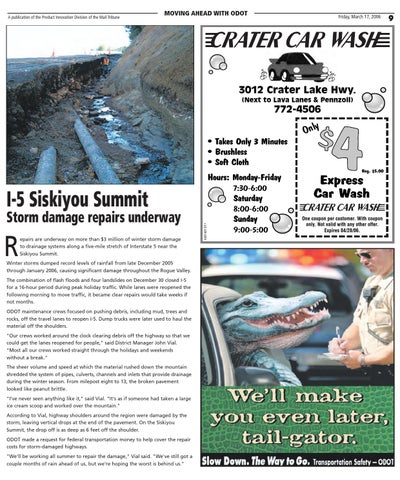