The Highway 62 Corridor teams are working toward submitting concepts for theEnvironmental Impact Statement.

The Highway 62 corridor from Medford to White City experiences heavy trafficand congestion. The volume of traffic in the corridor is similar to that found onInterstate 5 north of Medford.

Safety is another concern on the corridor. Crash rates from Poplar Drive to DeltaWaters Road and from Corey Road to Antelope Road exceed the statewide rate,primarily because of the volume of traffi c and roadways and driveways locatedbetween those points.

To date, the teams have worked through many concepts with four under review. The concepts can be reviewed at the project web site atwww.oregon.gov/odot/hwy/region3.

Motorists will experience delays during peak travel times until Memorial Day as rehabilitation continues on four Interstate 5 bridges from Phoenix to Talent.

Significant delays occur during peak travel times, the morning and evening commutes, because I-5 is narrowed to one lane in each direction.

Work includes modifying the bridge rail to current safety standards and building a new concrete deck. The work is part of the $12.4 million South Medford-North Ashland interstate paving project, which began in 2005.

Motorists should plan ahead, leave extra time for their commute and consider using alternate routes to avoid congestion.

The remaining work is on Biddle Road. The contractor, J.W. Fowler of Dallas, Oregon, is widening Biddle Road, as well as completing curbs, sidewalks, driveways and landscaping along the road.

The initial construction stages widened the bridges on Biddle Road and Highway 62;removed the Medco Haul Road over crossings; and built new on- and off-ramps for northbound I-5 traffic. Popular Drive was reconstructed and a new, signalized intersection was installed for both Fred Meyer and Poplar Square.

You can view the project via the Oregon Department of Transportation’s travel information web site, www.tripcheck.com.

Once a year, National Work Zone Awareness Week is observed as an annual reminder that the roadside is a workplace for hundreds of employees and that extra caution is required of motorists. The event was held April 3-9 this year with the Oregon Department of Transportation and Oregon State Police offering safety tips for motorists.

“The most important thing a driver can do is pay complete attention to driving, especially in the transition zone before the work area,” said Sunday Alberding, ODOT Safety Manager. “Slow down when you see orange barrels, cones and signs – even when there’s no construction work visible. Hazards still might exist.” 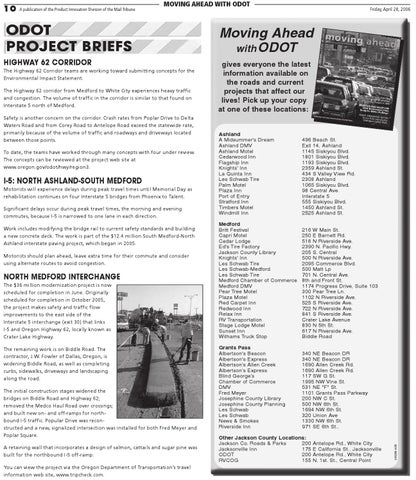