Earlier this month, the Oregon Department of Transportation completed its first major upgrade of the 7th Street Bridge in Grants Pass over the last 50 years. The work required a three-week closure to rehabilitate the bridge deck and rail.

The bridge work is part of a $3.3 million project to rehabilitate the pavement on 6th and 7th Streets, south of the Rogue River Bridges.

During the 22-day closure, northbound motorists driving into downtown Grants Pass were detoured to the Debbs Potts Bridge and M Street. While motorists experienced congestion during most of the day, especially during peak driving hours in the morning and afternoon, the work was completed without a major incident or crash.

“We really appreciated motorists’ patience with this bridge repair,” said Public Service Representative Bill Boyett. “We knew this stage would be a difficult period but we’re through the worst of it now.”

The overall project is designed to rehabilitate the pavement and sidewalk features in the south Y area. Paving work on 6th and 7th Streets will occur at night, which should reduce the traffic impact for motorists.

“Almost all of the paving crew from Copeland Paving should be off the roadway,” Boyett said.

Another key project feature is the realignment of Park and Lewis Streets at 6th Street. The realignment will eliminate two of three signals in that short stretch of 6th Street to help traffic flow.

“We’ve got a lot of work still ahead but, from a motorist’s standpoint, the worst is behind us,” Boyett said. 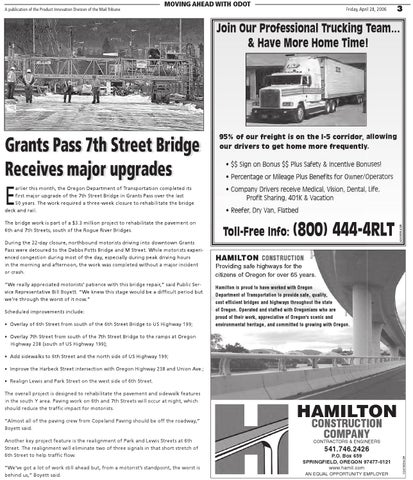