Commuters traveling along Oregon Highway 238 that use Bybee Corner often take a deep breath before turning on Hanley Road.

“Poor sight distance and alignment are a dangerous mix with the higher speeds we see on Highway 238,” said Project Information Specialist Gary Leaming. “Thankfully, help is on the way.”

Listed among the region’s top five crash sites, motorists were killed in crashes at Bybee Corner in 2004, 2000 and 1997.

A 30-day closure of Hanley Road will begin May 1 to allow replacement of a nearby bridge over Jackson Creek. Hanley Road will be open to local traffic coming from Central Point and from Medford on Rossanley Drive. Once the bridge is finished, the $3 million construction project will begin eliminating the poor sight distance at Bybee Corner, creating a more traditional “T” intersection.

“We delayed the start of the bridge replacement phase until after the Pear Blossom Run,” said Leaming.

During the first phase of the project last year, adjacent Jackson Creek was realigned away from Oregon Highway 238.

“In its former state, Jackson Creek next to the highway looked like a ditch,” said Region Environmental Coordinator Jerry Vogt. “However, it is a fish-bearing stream we would like to enhance.”

About 1,700 feet of streambed was moved 30-40 feet north of its current course. Boulders and root wads were anchored in place in the fall, and winter rains flooded the new streambed. Surprisingly, the floods washed in gravel and other fine aggregates thatprovide good fish habitat.

According to Vogt, ODOT worked with the Oregon Department of Fish and Wildlife to develop and improve the creek habitat.

When completed this fall, Oregon Highway 238 will feature a gentle curve and no stop sign where the interchange exists today. The route from West Main Street will include a stop at the new, realigned intersection.

“Drivers on Highway 238 will see the benefits of this project immediately,” said Leaming. “The road will be safer and much easier to travel.” 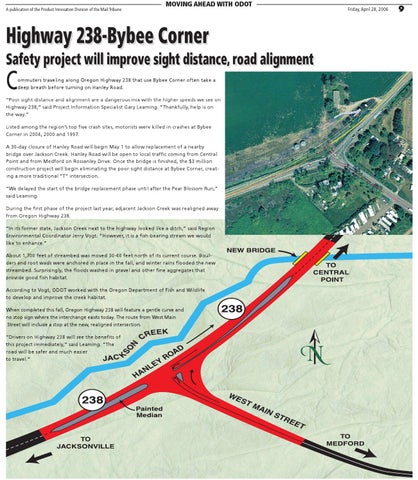