Traffic volumes are growing at the Seven Oaks interchange. While the interchange remains fairly rural in nature, it is attracting more traffic, especially trucks hauling freight and aggregate.

According to Oregon Department of Transportation Project Leader Tim Fletcher, the bridge is being replaced because it is structurally deficient due to cracking.

“ODOT is taking this opportunity to widen the bridge to accommodate three lanes on I-5 as well as improve the structure’s alignment for safety,” said Fletcher.

In addition to building a new bridge, the $24 million project modifies the southbound off-ramp. The configuration allows traffic to go beneath the overpass and loop back toward Rogue Valley Highway (Oregon Highway 99), where the connection will be signalized. Motorists bound for White City and Oregon Highway 140 would then turn right.

“This new configuration will allow a safer turning movement for motorists, but it will also provide more vehicle storage, especially for trucks,” said Fletcher. “Currently, vehicles are impeded by trucks heading toward White City.”

According to Fletcher, an interchange management plan currently under development will evaluate the interchange operations and identify both interim and long-range actions to protect the public’s investment.

Two existing I-5 bridges over the Central Oregon and Pacific Railroad will also be replaced as part of the project.

The construction phase for these bridges begins by building a new southbound structure between the existing bridges. Once the new structure is complete, northbound I-5 traffic will be moved onto the new bridge while replacement of the existing northbound bridge starts.

Northbound I-5 traffic will generally remain on the existing alignment. The bridges will be built to accommodate three lanes of I-5 traffic in each direction.

“These bridges are being constructed to last 50-75 years, so there may come a time when we may need more lanes,” Fletcher added. 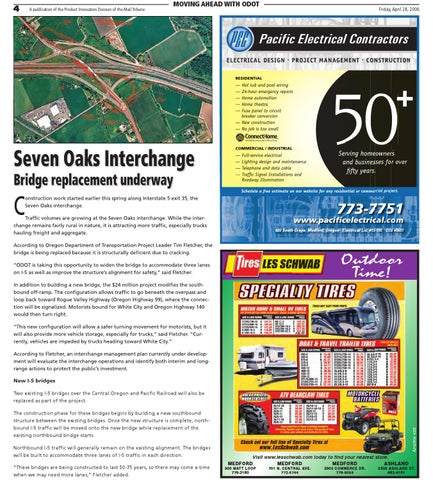