The design alternatives are part of the Highway 199 Expressway project from the South “Y” interchange (the intersection of Oregon Highways 99, 199 and 238) and west to Midway Avenue. This section of U.S. 199, currently designated as an Oregon Department of Transportation Safety Corridor, has a higher crash rate than the statewide average for similar highways.

Earlier this spring, the citizen teams were back reexamining some previously dismissed concepts and examining new ones.

“We heard from the public, as did the team members, and we would all feel comfortable revisiting some of these conceptual designs as well as try to look at new ones,” said Project Manager Debbie Timms.

The teams were briefed in May on a new design called ‘Concept C’ which provides an access road from Allen Creek road to the Josephine County Fairgrounds and YMCA. The Citizens Advisory Committee asked the management team to further refine the concept, match it with property already in public ownership, and bring it back to the committee.

An Environmental Analysis (EA) will be used to formulate project alternatives and reach a preferred alternative. Construction is scheduled to begin in 2009. The $12 million project includes a $2 million federal earmark.

“We’ve heard from the City of Grants Pass, Josephine County and businesses with frontage on the highway,” said Timms. “If the frontage road concepts continue into the EA, we have said it wouldn’t be constructed until after a future study on the South ‘Y’ is complete.”

Once the teams forward the build and no-build alternatives, the conceptual designs will be thoroughly examined for community impacts, such as neighborhoods, businesses, and noise. The Draft EA will also examine the natural environment such as any significant impacts to rivers, streams, plants and animals.

Concept alternatives are available for viewing online at: www.odot.state.or.us/region3public/hwy199/ 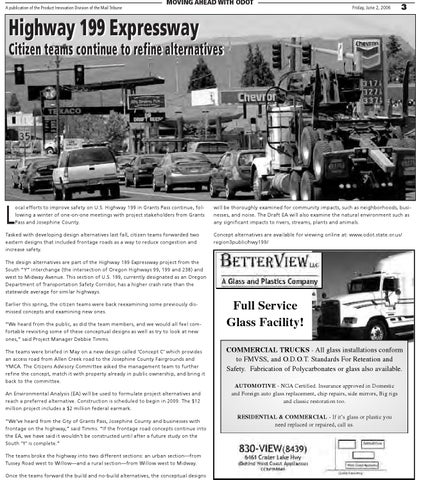