New bridge construction over Jackson Creek at Bybee Corner is nearly complete. Now, motorists’ main task is to navigate around the roadway work at Oregon Highway 238 and Bybee Corner.

“The contractor was able to snip the old bridge out and get the new one operational on schedule, just before the start of the summer tourist season,” said Project Information Specialist Gary Leaming. “We appreciate people’s patience on this and, thankfully, we have some good alternate routes.

The $3 million construction project is designed to reconstruct the hazardous intersection that is listed among the region’s top five crash sites. Motorists were killed in crashes at Bybee Corner in 2004, 2000 and 1997.

The contractor will continue working on the roadway alignment that make the movement to and from Hanley Road (Highway 238) the through movement between Medford to Jacksonville. Motorists coming from downtown Medford on West Main Street will not have to stop enroute to Jacksonville.

During the first phase of the project last year, adjacent Jackson Creek was realigned away from Highway 238.

“In its former state, Jackson Creek next to the highway looked like a ditch,” said Region Environmental Coordinator Jerry Vogt. “However, it is a fish-bearing stream we would like to enhance.”

About 1,700 feet of streambed was moved 30-40 feet north of its current course. Boulders and root wads were anchored in place in the fall, and winter rains flooded the new streambed. Surprisingly, the floods washed in gravel and other fine aggregates that provide good fish habitat.

According to Vogt, ODOT worked with the Oregon Department of Fish and Wildlife to develop and improve the creek habitat.

When completed this fall, Oregon Highway 238 will feature a gentle curve and no stop sign where the interchange exists today. The route from West Main Street will include a stop at the new, realigned intersection.

“Drivers on Highway 238 will see the benefits of this project immediately,” said Leaming. “The road will be safer and much easier to travel.” 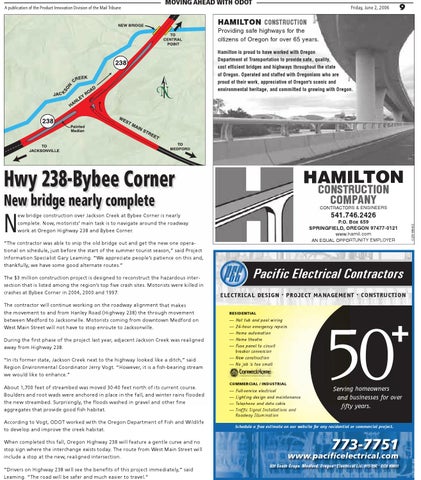