Traffic volumes are growing at the Seven Oaks interchange. While the interchange remains fairly rural in nature, it is attracting more traffic, especially trucks hauling freight and aggregate.

According to Oregon Department of Transportation Project Leader Tim Fletcher, the bridge is being replaced because it is structurally deficient due to cracking.

“ODOT is taking this opportunity to widen the bridge to accommodate three lanes on I-5 as well as improve the structure’s alignment for safety,” said Fletcher.

In addition to building a new bridge, the $24 million project modifies the southbound off-ramp. The configuration allows traffic to go beneath the overpass and loop back toward Rogue Valley Highway (Oregon Highway 99), where the connection will be signalized. Motorists bound for White City and Oregon Highway 140 would then turn right.

“This new configuration will allow a safer turning movement for motorists, but it will also provide more vehicle storage, especially for trucks,” said Fletcher. “Currently, vehicles are impeded by trucks headed toward White City.”

According to Fletcher, an interchange management plan currently under development will evaluate the interchange operations and identify both interim and long-range actions to protect its function and the public’s investment.

Two existing I-5 bridges over the Central Oregon and Pacific Railroad will also be replaced as part of the project.

The construction phase for these bridges begins by building a new southbound structure between the existing bridges. Once the new structure is complete, northbound I-5 traffic will be moved onto it while replacement of the existing northbound bridge starts.

Northbound I-5 traffic will generally remain on the existing alignment. The bridges will be built to accommodate three lanes of I-5 traffic in each direction

“These bridges are being constructed to last 50-75 years, so there may come a time when we may need more lanes,” Fletcher added.

The Highway 62 Corridor teams are working toward submitting concepts for the Environmental Impact Statement.

The Highway 62 corridor from Medford to White City experiences heavy traffic and congestion. The volume of traffic in the corridor is similar to that found on Interstate 5 north of Medford.

To date, the teams have worked through many concepts with four under review. The concepts can be reviewed at the project web site at www.oregon.gov/odot/hwy/region3.

Motorists will experience delays during peak travel times as rehabilitation continues on four Interstate 5 bridges from Phoenix to Talent.

Significant delays occur during peak travel times, the morning and evening commutes, because I-5 is narrowed to one lane in each direction.

Work includes modifying the bridge rail to current safety standards and building a new concrete deck. The work is part of the $12.4 million South Medford-North Ashland interstate paving project, which began in 2005.

Motorists should plan ahead, leave extra time for their commute and consider using alternate routes to avoid congestion.

The $36 million modernization project is scheduled for completion at the end of this month. The project improves safety and traffic flow to the east side of the Interstate 5 interchange (exit 30) that links I-5 and Oregon Highway 62, locally known as Crater Lake Highway.

The initial construction stages widened the bridges on Biddle Road and Highway 62; removed the Medco Haul Road over crossings; and built new on- and off-ramps for northbound I-5 traffic. Popular Drive was reconstructed and a new, signalized intersection was installed for both Fred Meyer and Poplar Square.

You can view the project via the Oregon Department of Transportation’s travel information web site, www.tripcheck.com.

The Oregon Department of Transportation’s live talk show, Moving Ahead with ODOT, will provide a look what’s on the summer construction schedule around the Rogue Valley. The program airs live on Wednesday, June 14 at 6 p.m. on Rogue Valley Community Television government channels 30 (Jackson County) and 14 (Josephine County).

The program features a call-in segment that offers viewers the opportunity to discuss transportation issues. Viewers can participate by dialing the program call-in number: 541-552-6079. Rebroadcast dates and times are available at www.roguetv.org.

It’s late spring, the season Oregon children are ?nishing another year of school and heading into summer vacation, but drivers still need to follow speed limits in school zones.

House Bill 2840 from the 2005 Legislature will change the law in some school zones, as of July 1 this year. During the summer, signs will be replaced in zones affected by the law change in time for the next school year beginning in the fall.

“Both before and after any signs are changed, drivers need only remember to fol-low the 20 mph speed limit when and where the signs say,” said Sue Riehl, Youth Program Manager for the Oregon Department of Transportation’s Safety Division.

Oregon law will continue to require drivers to slow to 20 mph in school zones where ?ashing lights indicate children may be arriving at or leaving school. What will change over the summer is that if a school zone has no ?ashing lights, the 20 mph speed limit will apply from 7 a.m. to 5 p.m. on days when school is in session 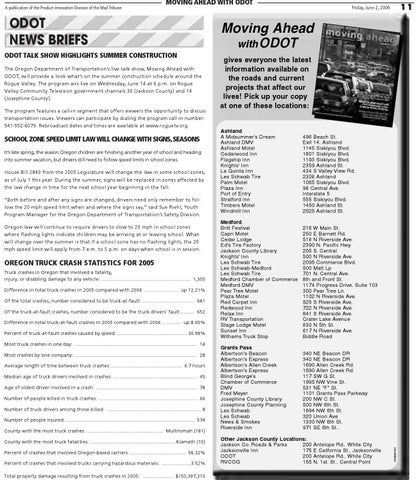