Almost 45 years ago, former Oregon Transportation Commission Chairman Glenn Jackson of Medford dedicated Interstate 5 at the Barnett Road interchange. So it was fitting that another OTC Chair from Medford, Stuart Foster, led a group of local, city and state officials during the May 23 dedication of the largest state highway project to begin construction in the Rogue Valley — the $70 million South Medford Interchange Project — since I-5 was built.

Foster, Medford Mayor Gary Wheeler, the chairs of the Rogue Valley Area Commission on Transportation and the Transportation Advocacy Committee were among a group of more than 40 local stakeholders at the groundbreaking ceremony.

After seven years of development, the $70 million project moves into the construction phase.

“Medford had about 30,000 people then and it was a rural community. Now, it’s an urban community and it’s time to build an urban interchange,” said OTC Chairman Stuart Foster. “This interchange will allow traffic to move better in south Medford, and allow Medford to grow as a community and as a regional commercial center.”

Wildish Standard Paving of Eugene is the prime contractor for the project, which may take three to four years to construct.

“This is quite simply the largest project many of us have ever worked on,” said ODOT Area Manager Art Anderson. 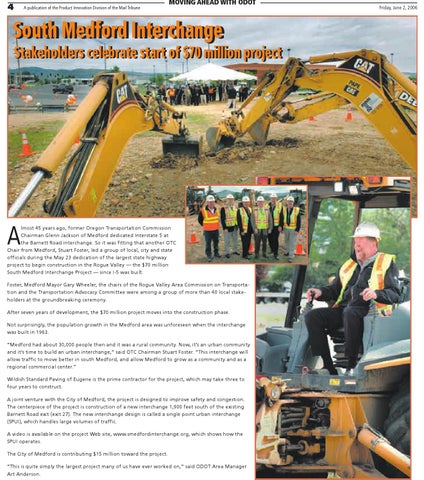