Fern Valley Interchange project is still in the development stage, with seven concepts under consideration. Since this past spring, the Citizens Advisory Committee and Project Development Teams have been meeting nearly every month at the Phoenix High School Commons. Their task, by this autumn, is to fi nd the best mix of alternatives to forward into the Environmental Assessment.

“The now well-attended meetings are a result of the teams forwarding two alternatives last January for further review that would have had a huge affect on Highway 99 and its businesses near Fern Valley and Boltz Road,” said Project Leader Debbie Timms.

The alternatives, designed to handle projected growth in 20 years, would have had impacts on existing Highway 99 businesses.

“Due to public concern, and two vacancies for reasons of health and non-attendance on the Citizens Advisory Committee, the CAC placed two members of the newly-formed Phoenix Association of Business and Property Owners on the committee,” said Timms.

ODOT has made a designer available to the association to help put some of their ideas on paper. There are currently seven alternatives, or variations of the alternatives, on the table. In future meetings, those alternatives will be further examined in relation to the team’s problem statement and goals and objectives for the project.

The Fern Valley Interchange experiences traffic congestion throughout the day, especially in the morning and afternoon. New and proposed development on the east side of the interstate, and general growth of the Rogue Valley, is choking its capacity and causing safety concerns.

The teams meet every first Wednesday of the month at 6:30 p.m. at the Phoenix High School Commons. The public is welcome. 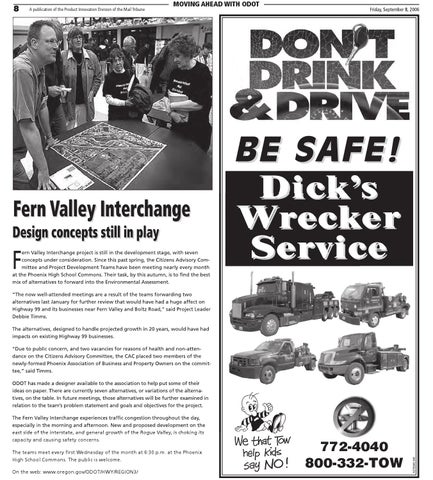