The year 2006 marks the 50th anniversary of the federal law that brought America its interstate highway system. On June 29, 1956 President Dwight Eisenhower signed the Federal Aid Highway Act of 1956 into law, beginning one of the biggest engineering projects ever undertaken.

The 46,508 miles of interstate highways have transformed our nation and our economy. The wide, relatively straight roadways in the interstate highway system were designed to be faster and safer than the two-lane roads that preceded them, bringing amazing and sometimes controversial changes to our way of life.

The American Association of State Highway and Transportation Offi cials is sponsoring a year-long celebration of the 50th anniversary of the interstate highway system called “Celebrate the Interstate!”

A recognized national leader in road building and highway construction since early in the 20th century, Oregon would once again fi nd itself in the forefront, making speedy progress toward completing its portions of the interstate system. After the passage of the 1956 Federal Highway Act, Oregon was consistently among one of the most ambitious and fast-acting states in completing interstate highway miles. For example, California did not achieve a completed interstate highway from border-to-border until six years after Oregon.

Oregon’s 308-mile long portion of Interstate 5 runs the north/south length of the state from the Columbia River to the California border. I-5, also know as the Pacific Highway, was the first portion of Oregon’s interstate highway system to be completed.

In Oregon, where much of the interstate incorporated portions of the earlier, statefunded expressway system, the original two-lane highways were augmented with a parallel two lane route, each of which then became singledirection in an interstate standard four-lane highway. This process allowed Oregon to maintain effi cient through-travel during construction, even in those places where the original U.S. route was to be replaced rather than bypassed by the new interstate system. Today evidence of this two-part construction remains, particularly in sections of I-5 between Salem and Portland.

A 10.2-mile portion of I-5, initially known as the Fords Bridge Unit and later referred to as the Myrtle Creek-Canyonville segment, was the fi rst section contract of interstate in Oregon to be awarded following the passage of the Act. Construction was completed in 1959 at a cost of $5,500,000. The Myrtle Creek section, nestled between a large cut to the west and the Umpqua River to the east, follows a sharply curved route that still requires flashing lights and signed speed reductions.

Among the more unique elements of the interstate in Oregon is the Medford Viaduct, a 3,229-foot-long steel beam and girder bridge that carries the highway corridor through the middle of that city as an elevated freeway rather than one at grade. The construction of the viaduct was among the more controversial and protracted of the siting decisions outside the Portland area.

The southernmost sections of I-5, beginning at Steinman, south of Ashland, and continuing to the California-Oregon border, include some of the steepest interstate grades in the nation. Construction of the interstate south of Ashland was entirely on a new roadbed cut through the mountains, making this among the most challenging and expensive portions of the Oregon interstate road outside the Portland metropolitan area. At its peak, the Siskiyou project had more than 600 workers on the job, moving 75,000 cubic feet of road-building-related material every day.

The last links in the I-5 chain had come together in time to meet the 1966 deadline set by Governor Mark Hatfi eld. The Marquam Bridge, connecting the Baldock Expressway and East Bank Freeway across the Willamette in Portland, was opened to traffic on October 18, 1966. Four days later, on October 22, 1966, a dedication ceremony was held at the Cow Creek Safety Rest Area, south of Canyonville, in Douglas County, celebrating the completion of I-5.

Learn more about the history of the interstate highway system by visiting http://www.oregon.gov/ODOT/COMM/interstate50.shtml. 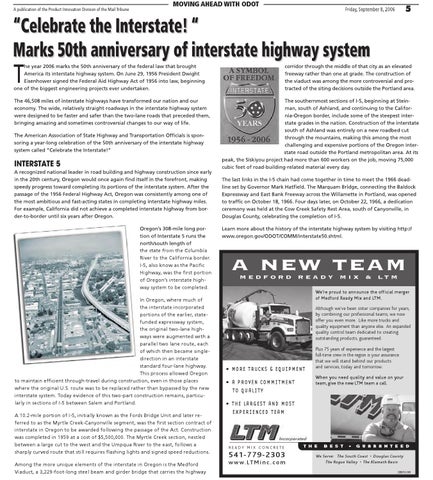