First, there were many; then four — now three.

The Highway 62 Corridor teams, meeting regularly for past two years, are now planning an open house later this month to get feedback on three project concepts.

“The open houses will show the three current designs, and we’re hoping to get some constructive comments from the public,” said Debbie Timms, ODOT project leader.

The Highway 62 corridor from Medford to White City experiences some of the heaviest traffic and congestion in southern Oregon. The volume of traffic in the corridor is similar to that found on Interstate 5 north of Medford.

Safety is another concern on the corridor. Crash rates from Poplar Drive to Delta Waters Road and from Corey Road to Antelope Road exceed the statewide rate, primarily because of the volume of traffi c and roadways and driveways located between those points.

“We’ve reached out to the businesses and industrial users on the north and south parts of the corridor earlier this spring and summer and received some excellent feedback,” Timms said.

THE CURRENT CONCEPTS INCLUDE:

The concepts can be reviewed at the project web site at www.oregon.gov/odot/hwy/region3. 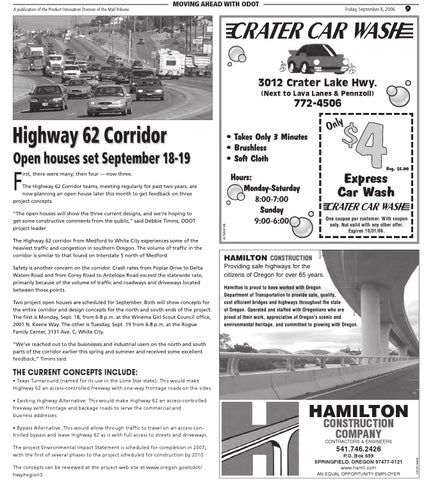