The $24 million project improves the Seven Oaks or Blackwell Road interchange and replaces the two interstate bridges over the Central Oregon and Pacific Railroad.

The Blackwell Road overpass is functionally obsolete and traffi c volumes are growing in the area. While the interchange remains fairly rural in nature, it is attracting more traffic, especially freight and aggregate trucks.

“ODOT is taking this opportunity to widen the bridge to accommodate three lanes on I-5 as well as to improve the structure’s alignment for safety,” said Project Leader Tim.

In addition to building a new Blackwell Road overpass, the project modifies the southbound off-ramp. The configuration allows traffic to go beneath the overpass and loop back toward Rogue Valley Highway (Oregon Highway 99), where the connection will be signalized. Motorists bound for White City and Oregon Highway 140 would then turn right.

Traffic is now on its new alignment on the Highway 238-Bybee Corner project between Medford and Jacksonville.

Paving is complete and the contractor is finishing final details such as striping and driveway approaches at the new intersection, which previously had been listed among the region’s top five crash sites.

Oregon Highway 238 now has a gentle curve and no stop sign where the interchange exists today. The route from West Main Street now includes a stop at the new, realigned intersection.

The $3 million project also constructed a new bridge over Jackson Creek. To accommodate the new alignment, Jackson Creek was moved about 40 feet to the north and enhanced for fish habitat.

With the exception of the fi nishing touches to landscaping, the North Medford Interchange project is nearly finished.

The $36 million modernization project is in its fi nal stages of construction. The project improves safety and traffi c flow to the east side of the Interstate 5 interchange (exit 30) that links I-5 and Oregon Highway 62, locally known as Crater Lake Highway.

“It’s been more than two years, but the interchange works,” said Area Manager Art Anderson. “Highway 62 traffic moves more easily, and we don’t have the back ups onto the northbound on-ramp on Interstate 5. All these problems were solved by the project.”

The initial construction stages widened bridges on Biddle Road and Interstate 5, removed the Medco Haul Road over crossings, and built new on- and off-ramps for northbound I-5 traffic. Poplar Drive was reconstructed and a new, signalized intersection was installed for both Fred Meyer and Poplar Square.

To take a peek at how much the interchange has changed over the years, go online to see historical photos at: http://www.oregon.gov/ODOT/HWY/REGION3/nmi_historic_photos.shtml.

DMV TO STOP ACCEPTING RENTAL AGREEMENTS AS PROOF OF ADDRESS

As of Aug. 25, DMV no longer accepts rental agreements or lease contracts as proof of residence address when customers apply for drivers licenses or identification cards because they are too easy to counterfeit.

State law requires proof of a person’s residence address before DMV can issue a driver license, instruction permit or ID card because only Oregon residents are eligible for Oregon driving privileges and ID cards.

DMV employees are trained to recognize fraudulent documents. They have the discretion to reject an applicant’s documents and require additional evidence to verify identity or address.

Are you interested in understanding how Oregon prioritizes, schedules and funds transportation projects around the state? The Oregon Department of Transportation has the book for you! For the fi rst time, the procedures involved in developing the Statewide Transportation Improvement Program are together in one place: www.oregon.gov/ODOT/TD/TP/stipGuide.shtml.

The STIP Users’ Guide, a 250+ page document, details the processes ODOT uses every two years to create its list of recommended transportation projects for funding and construction. It begins with a broad overview for those with a general interest, and then describes specifi c procedures for each ODOT region and each major program. Anyone wanting to research a type of project or the processes used in particular areas will find the guide useful.

The overall goal of the new guide is to help transportation stakeholders gain a better understanding of how ODOT develops its list so that they can fully participate in the process. Stakeholders include city, county and regional government organizations and advisory groups, port and transit districts, contractors, citizens, business and community groups, elected officials, and others. The guide will be updated periodically as needed. 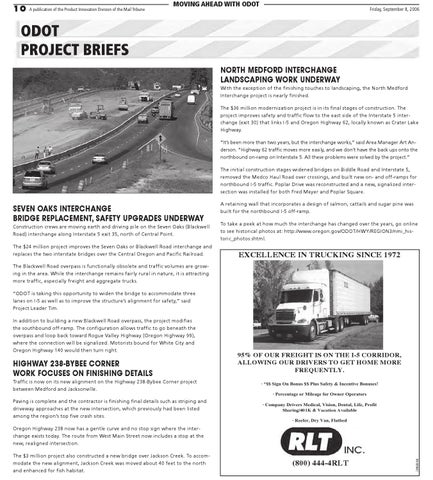