South Medford InterchangeConstruction in Progress on Northbound I-5 Detour

Bridges are beginning to take shape, even though they are temporary, on the South Medford Interchange projet.

Wildish Standard Paving of Eugene began construction on the interchange in May, and work is proceeding to repalce the aging Interstate 5 bridges over Bear Creek.

“The first thing people will notice is driving on the northbound temporary bridges over Bear Creek,” said ODOT Public Service Representative Bill Boyett. “By the end of this fall, traffic will move to those temporary structures so the contractor can demolish the old structure and begin work on the new, permanent bridges on the original interstate alignment.”

In March, the $70 million South Medford Interchange project went to bid after more than seven years of development on the Rogue Valley’s largest state highway project since Interstate 5 was built.

“This is quite simply the largest project many of us have ever worked on,” said Area Manager Art Anderson. “The plan sheets alone for this project are about 800 pages.”

A project Solution Team and Citizens Advisory Committee worked through more than 20 different concepts to develop the best design. The Highland Alternative was identified as the preferred alternative. 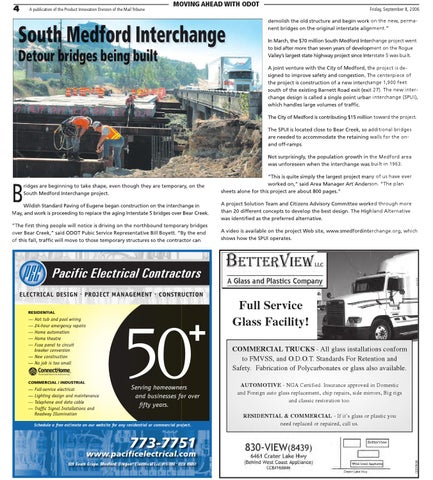