Grants Pass citizens and businesses concerned about two of the alternatives to address congestion and safety on U.S. Highway 199 still have time to provide input on the project, but the window is closing.

Last summer, the two project teams – Citizens Advisory Committee and Project Development Team – voted unanimously to forward Alternatives A and C into the Environmental Assessment. At an Oct. 11 meeting, the teams heard an update on the US Highway 199 Expressway project’s progress and received public comment.

“We promised the project teams we would update them on the design and technical analysis,” said ODOT Environmental Project Manager Jerry Marmon.

A Draft Environmental Analysis is scheduled for completion in early 2007. At that time, there will be a formal 30-day public comment period. The document must address new concepts or information received. If the Federal Highway Administration accepts the Draft Environmental Analysis, the document will be used to modify project alternatives and reach a preferred alternative by summer 2007. Construction of the $12 million project, which includes a $2 million federal earmark, is scheduled to begin in 2009.

The teams had forwarded two eastside alternatives for study, after stepping backing late last year to address concerns. That delay resulted in a modified design to accommodate access to the Josephine County Fairgrounds, YMCA, and businesses along Highway 199.

Last May, both project teams reviewed a new design, ‘Concept C,’ which provides an access road from Allen Creek road to the Josephine County Fairgrounds and YMCA. The Citizens Advisory Committee asked for further refinement (matching it with property already in public ownership) and to return the concept to the committee. Following refinement, the concept was approved along with Concept A in July.

Concept alternatives and other project information are available online at: www.odot.state.or.us/region3public/hwy199/. 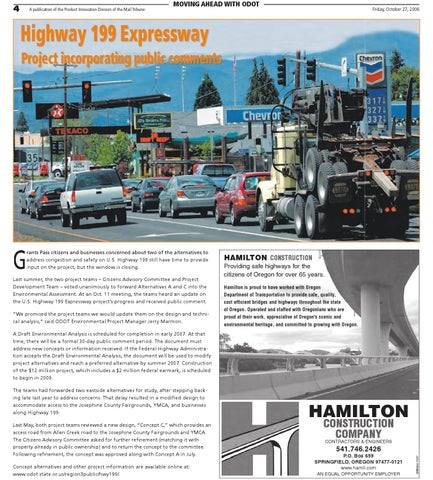