There are still three options on the table for the Highway 62 Corridor project, but a majority of respondents who attended the two September open house meetings favored one concept, the Bypass-Split Diamond, over the other two concepts.

“An overwhelming majority of the comments we heard at the Medford and White City open houses were focused on the bypass concept with the split diamond,” said Debbie Timms, ODOT project leader.

“The Citizens Advisory Committee is anxious to narrow the options and send them to the Project Development Team for a vote.”

The Highway 62 corridor from Medford to White City experiences congestion and safety problems. The number of vehicles in the corridor is similar to that found on Interstate 5 north of Medford. 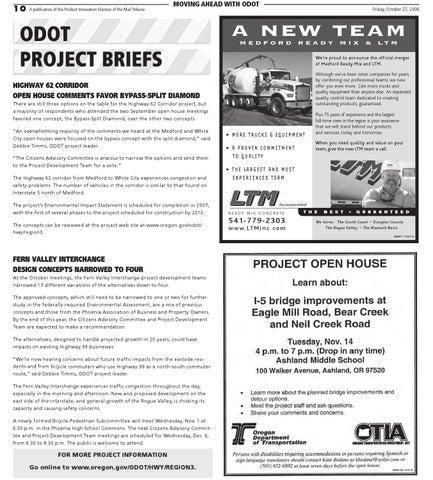