After a short weekend closure, a new northbound off-ramp is in place at the Seven Oaks interchange along Interstate 5 exit 35, north of Central Point.
“We appreciated people’s patience while the contractor worked the weekend into Monday to get that new alignment in place,” said ODOT Project Manager Tim Fletcher.

That ramp change was important so the contractor, Ross Brothers Construction of Salem, could begin adding and compacting the base of the new Blackwell Road overpass over I-5.

“Ross Brothers Construction has completed a lot of work on the drilled shafts, which will form the vertical piers for the new overpass,” said Fletcher.
Once drilled, the contractor places cage-like steel structures inside the shafts. Then, a reusable collar is placed around the cages and concrete is pumped inside to form the vertical pier.

The existing Blackwell Road overpass is functionally obsolete. Traffic volumes are growing in the area. While the interchange remains fairly rural in nature, it is attracting more traffic, especially freight and aggregate trucks.

“ODOT is taking this opportunity to lengthen the bridge to accommodate a third future lane on I-5 as well as to improve the structure’s alignment for safety,” said Fletcher.
The $24 million project improves the Seven Oaks (also known as Blackwell Road) interchange and replaces the two interstate bridges over the Central Oregon and Pacific Railroad.

Drivers may have noticed the build up of material in the median between the interchange and the railroad bridges. According to Fletcher, the rise in vertical alignment will increase clearance above the railroad tracks and provide better site distance and safety for interstate users.

In addition to building a new Blackwell Road overpass, the project modifies the southbound off-ramp. The configuration allows traffic to go beneath the overpass and loop back toward Rogue Valley Highway (Oregon Highway 99), where the connection will be signalized. Motorists bound for White City and Oregon Highway 140 would then turn right. 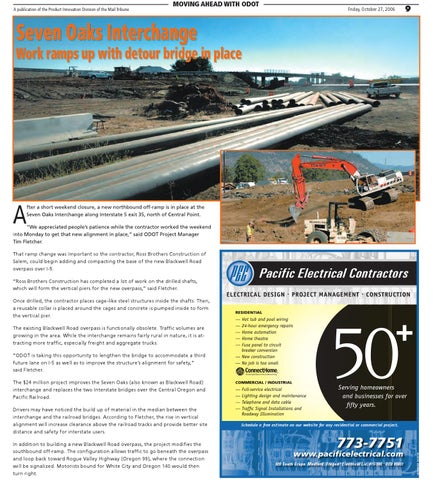