The first steel reinforced concrete beams, 110 feet long and weighing 15 tons apiece, are sitting on the first of nine bridges under construction as part of the South Medford Interchange project.

Two large cranes immediately lifted the beams in place on what will be a new bridge over Larson Creek, connecting Barnett Road with the new interchange.

“That’s just a snapshot of the work that has been going on in the construction zone,” said ODOT Public Service Representative Bill Boyett. “It’s like one big sandbox of activity — bulldozers, front end loaders, compactors, cranes — name any large piece of equipment and chances are we have it working on site.”

The temporary detour bridge that spans Bear Creek on northbound Interstate 5 opened to traffic on October 10. That allowed the contractor, Wildish Standard Paving of Eugene, to begin replacing the aging interstate bridges over Bear Creek.

Last March, the $70 million South Medford Interchange project went to bid after more than seven years of development. The City of Medford is investing $15 million toward the project, which is the Rogue Valley’s largest state highway project since I-5 was built 45 years ago.

Not surprisingly, the population growth in the Medford area was unforeseen when the Oregon Highway Department built the interchange in 1963.

A joint venture with the City of Medford, the project is designed to improve safety and reduce congestion. The centerpiece of the project is construction of a new interchange 1,900 feet south of the existing Barnett Road exit (exit 27). The new interchange design is called a single point urban interchange (SPUI), which can handle large volume of traffic.

The SPUI is located close to Bear Creek, so additional bridges are necessary to accommodate the retaining walls for the on- and off-ramps.A project Solution Team and Citizens Advisory Committee worked through more than 20 different concepts to develop the best design. The Highland Alternative was identified as the preferred alternative. 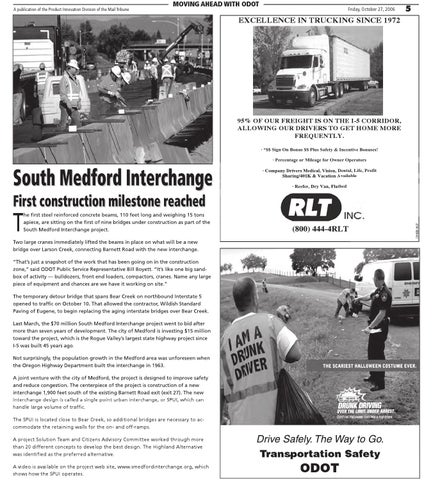