Fern Valley Interchange project teams, with a goal of narrowing four alternatives to two, received an overview on a new interchange type at its meeting last Wednesday at the Phoenix High School Commons.

Compared to a standard diamond interchange, it moves traffic quicker because it reduces the number of stops thus improving efficiency. They are also less disruptive to established businesses near the interchange. The width of the over-crossing structure is typically less than that required for a conventional diamond interchange.

“This type of interchange is being considered elsewhere, so we thought we should look at it for Fern Valley,” said ODOT Area Manager Art Anderson.

The presentation on the interchange type comes as the teams have narrowed the alternatives to four at their October meetings.

The approved concepts, which still need to be narrowed to one or two for further study in the federally-required Environmental Assessment, are a mix of previous concepts and those from the Phoenix Association of Business and Property Owners. By early next year, the Citizens Advisory Committee and Project

Development Team are expected to make a recommendation.

“We’re now hearing concerns about future traffic impacts from the eastside residents and from bicycle commuters who use Highway 99 as a north-south commuter route,” said Debbie Timms, ODOT project leader. 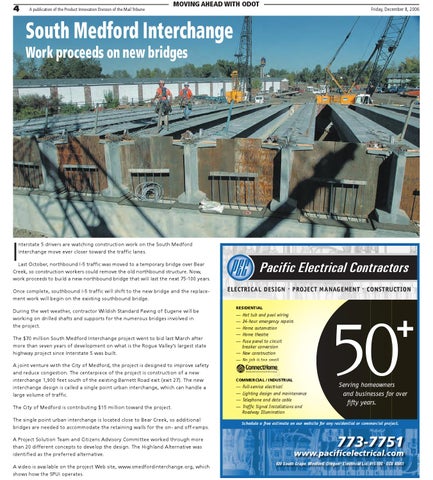