Highway 199 ExpresswayEnvironmental document due for release

The Highway 199 Expressway project is nearing a milestone with the expected release of the Draft Environmental Assessment in January 2007.

Last July, the project teams – the Citizens Advisory Committee and Project Development Team – voted unanimously to forward Alternatives A and C into the Draft Environmental Assessment. That was followed with an October meeting when the teams heard an update on the project’s progress and received public comment.

“We promised the project teams we would update them on the design and technical analysis,” said ODOT Environmental Project Manager Jerry Marmon, and it was a good time to listen to any public comment as well.”

Once the Draft Environmental Assessment is released, there will be a formal 30-day public comment period. Any new concepts or information received must be addressed. If it is found acceptable, it could be used to modify project alternatives and reach a preferred alternative by summer 2007. Construction is scheduled to begin in 2009.

Concept alternatives, including those dismissed, are available online at: www.odot.state.or.us/region3public/hwy199/. 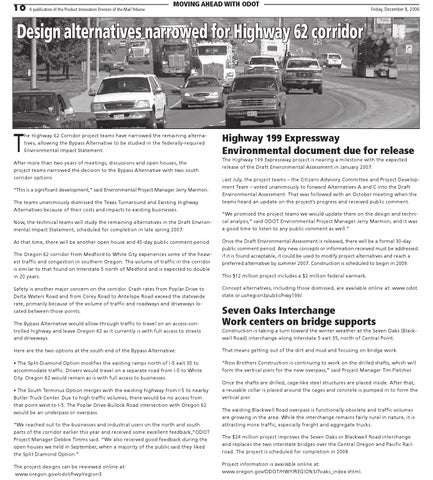