A Major facelift to Oregon Highway 99 through Talent is nearly complete after more than a year of construction.

“Number one, the project increases safety in Talent at the intersection with Rapp Road and Highway 99, as well as at Colver,” said City of Talent Mayor Marion Telerski.

The $6.4 million project modernized Oregon 99 and improved the streetscape through the thriving community. The project added curbs, gutters, sidewalk access, bicycle lanes and landscaping to the previous wide stretch of asphalt.

“This type of small community improvement would’ve been very difficult to fund if not for the legislature’s approval of the first Oregon Transportation Investment Act in 2001,” said ODOT Area Manager Art Anderson.

The projects other improvements included:

ODOT and the City of Talent worked together on the project, which is funded by the 2001 Oregon Transportation Investment Act. 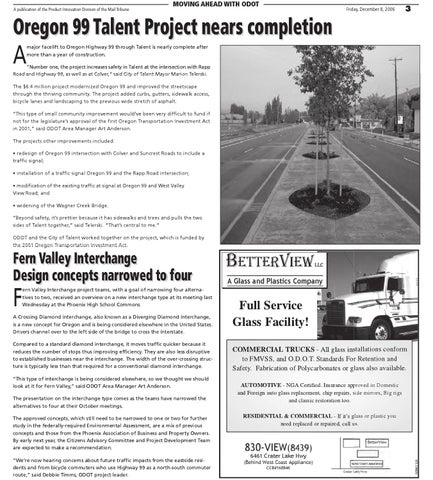