Preparation and patience are keys to safe winter driving

State and local agencies annually remind motorists to prepare their vehicles, to carry chains, to make sure the heater and battery are in good working order and to gear up for winter weather driving.

“You can’t expect to travel over the mountains in winter without occasional delays,” said ODOT District Manager John Vial. “We’re at the mercy of the weather and conditions can change quickly.”

According to Vial, delays along Interstate 5 are not uncommon under chain requirements on the Siskiyou Pass.

“A big snowstorm really tests motorists’ patience,” said Vial. “With the volume of traffic and experience of drivers, it’s a challenge to keep the road open when a snowstorm hits, especially on the Siskiyou and Sexton passes.

“If you’re prepared, you’ll stay warm and safe in your vehicle until you get over Siskiyou Pass,” Vial said. “Don’t take chances; prepare for the worst.”
Siskiyou Pass

The Siskiyou Pass presents a unique challenge both to drivers and to ODOT’s maintenance crews. When a storm hits Southern Oregon, the highest priority is the ten-mile stretch of Siskiyou Pass on I-5, due to its importance as a regional freight route and its high traffic volumes.

Other mountain passes in Southern Oregon are maintained at lower levels of service than the Siskiyou Pass. While the Sexton and Smith Passes on I-5 in Josephine County have equal priority to the Siskiyous, those mountain passes are at significantly lower elevations and do not see the same frequency of winter storms.

“Because of the grades, the traffic and the experience of drivers on Siskiyou Pass, we go to a higher standard of traction devices,” Vial said. “When we say chains are required on the Siskiyous, every vehicle has to chain up except vehicles equipped with four-wheel drive.”

Storm-related delays and short-term closures on the Siskiyou Pass are a common occurrence during winter, however, some motorists are still caught ill-equipped to travel over the I-5 mountain pass.

“One of the biggest errors we see on the Siskiyous is people unprepared for winter conditions and a long wait in their car,” Vial said. “We’ve seen people in shorts and tennis shoes. They have no gloves and no flashlight, but they’re bent over in the snow trying to chain up.”

With a winter maintenance goal to maintain a safe driving surface, ODOT Maintenance crews in the Rogue Valley use many different tools and practices, including plowing, chemicals and sanding materials, to stay ahead of the winter weather.

“Our crews really gear up for winter,” said Vial. “When a snowstorm hits, it’s an all-hands-on-deck exercise and keeping the highway open is our first priority.”

ODOT Maintenance crews also shift their schedules to provide 24-hour coverage around the Rogue Valley during the winter. 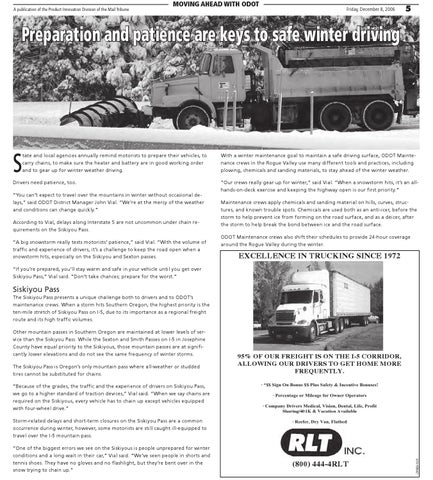