The Oregon Transportation Commission has recognized the successful completion of Stage 1 of the Oregon Department of Transportation’s OTIA III State Bridge Delivery Program and acknowledged the efforts of many public- and privatesector partners. The approximately $70 million of work in Stage 1 work completed in October replaced 19 bridges and repaired two, from Mount Hood in the north to Klamath Falls in the south and east to Burns. There are five stages in the 10-year, $1.3 billion OTIA III bridge program improving nearly 300 Oregon bridges.

“Oregon’s economic future depends on safe, reliable transportation, and bridges are critical assets in our ground transportation system,” Governor Ted Kulongoski said. “I’m proud of ODOT’s hard work to implement the bridge program, and I congratulate all the public agencies, private businesses and professional associations for their commitment to making it a success. I also want to stress that this is just the beginning — Oregon will see the project through to completion, creating thousands of jobs and making the shipment of goods and services more effi cient and profitable for the people who do business here.”

“The OTIA program is changing the way ODOT does business,” said OTC Chairman Stuart Foster. “The agency is delivering the bridge program with Oregon contractors. We are lucky we have skilled professionals in this state who provide such a high quality of service. The bridge program is strengthening the contracting, professional and design communities. Oregon will come out of the OTIA program with a private sector that will continue to deliver projects that benefit citizens.”

“This progress occurred because of the excellent work of our stakeholders. Their contributions have been key to this success,” said ODOT Director Matthew Garrett. “We thank our partners working with us to improve Oregon’s transportation system and support its economy.”

ODOT is maintaining mobility by staging construction. Completion of bridge projects on U.S. 97, U.S. 26 and U.S. 20 allows motorists to use these alternate routes while bridge construction takes place on Interstate 5 and Interstate 84.

The Mount Hood to Chemult project was the largest design-build project in ODOT history, replacing 10 bridges along a 200-mile stretch of Oregon 224, U.S. 26 and U.S. 97. ODOT completed the $35 million project in just two and a half years. The project broke records when contractors installed the biggest precast, prestressed concrete beams ever used in Oregon. Seven single-span beams measuring nearly 184 feet long and weighing 179,000 pounds each were installed at the UPRR Chemult Bridge on U.S. 97 in July 2005.

The beams were manufactured by Morse Bros., an Oregon company based in Linn County. Due primarily to work on the bridge program, Morse Bros. has increased the number of employees at its Harrisburg plant from 80 to 180.

“The bridge program is having an immediate impact around here,” said Loren Later, general manager of the Morse Bros. prestressed division. 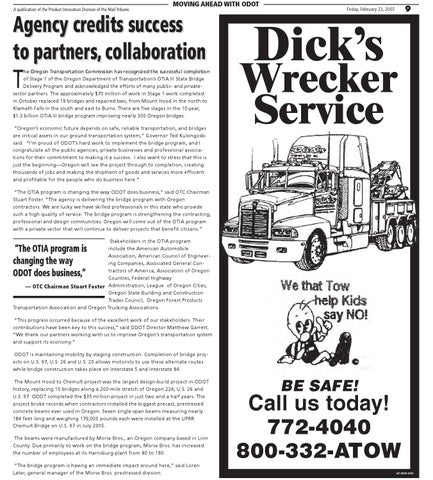