The Highway 199 Expressway project in Grants Pass recently completed a 30-day public comment period to review two proposals for improving safety and congestion on the highway, which connects to northern California.

The design alternatives are part of the Highway 199 Expressway project from the South “Y” interchange (the intersection of Oregon Highways 99, 199 and 238) and west to Midway Avenue.

Construction is scheduled to begin in 2009. The $12 million project includes a $2 million federal earmark.

In July 2006, the two project teams – the Citizens Advisory Committee (CAC) and the Project Development Team (PDT) – voted unanimously to forward Alternatives A and C into the Environmental Assessment. Community concerns early in the process resulted in a modified design to accommodate access to the Josephine County Fairgrounds, YMCA, and businesses along Highway 199.

The alternatives include a west corridor from Hubbard Lane to Midway Avenue, which is more rural in nature and is currently designated as an Oregon Department of Transportation Safety Corridor with a higher crash rate than the statewide average for similar highways.

During the 30-day comment period, new alternatives presented included one by the local stakeholder group, ACCESS, represented by Grants Pass attorney Duane Schultz, whose clients include businesses in the corridor.

The CAC and PDT will evaluate and answer comments that were brought forward during the 30-day window, including those received at the February 8 open house. In addition, the teams are looking at landscaping and aesthetic features.

Concept alternatives, including alternatives already dismissed, are available for viewing on the web at: www.odot.state.or.us/region3public/hwy199/. 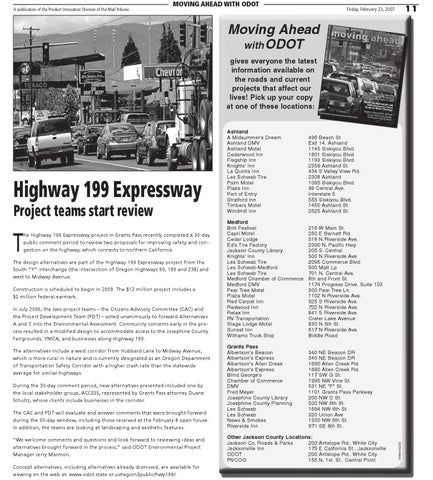