Plans are in the works to construct the Bear Creek Greenway in the footprint of the $70 million South Medford interchange project, but ODOT is awaiting final plans for a crossing either over or under Barnett Road.

“We’re ready to issue a change order to our South Medford Interchange contract,” said ODOT Area Manager Art Anderson. “We will issue the change order when Jackson County and the Greenway Foundation select a route and secure the necessary environmental permits, right of way and design for that leg of the Greenway.”

Jackson County and its consultants are working on plans that would take the greenway path next to Bear Creek and under the east side of the new Barnett Road Bridge.

“We are working closely with our consultant, examining seven alternative trail routes so that we can include the preferred connection in the ODOT project,” said Jackson County Special Projects Manger Karen Smith.

ODOT and the county has plans for the public to use a ‘multi-use path’ — a maintenance road/bikeway from Barnett Road to the Interstate 5 bridges — as an alternate means for users to cross Barnett Road and get back on the Bear Creek Greenway. This work entails an at-grade crossing at a signalized intersection.

“If the design and permits are finished prior to completion of the new interchange, and the budget allows, this work can be added,” Anderson said.

A joint venture with the City of Medford, the South Medford Interchange project is designed to improve safety and congestion. The centerpiece of the project is construction of a new interchange 1,900 feet south of the existing Barnett Road exit (exit 27). The new interchange design is called a single point urban interchange (SPUI), which handles large volumes of traffic.

The City of Medford is contributing $15 million toward the project. The SPUI is located close to Bear Creek, so additional bridges are needed to accommodate the retaining walls for the on- and off-ramps. 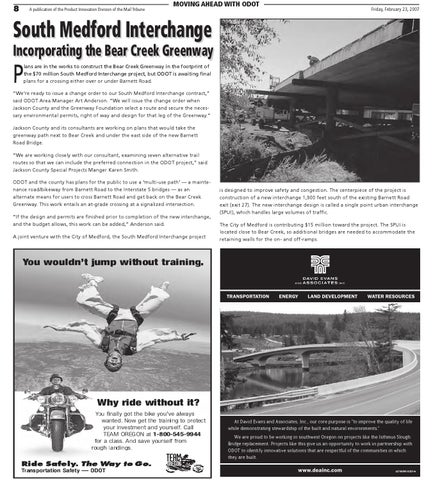