With the design footprint approved, work now begins on two bypass alternatives for the Highway 62 Corridor project. Both alternatives will be studied in the Draft Environmental Impact Statement (EIS).

The project, which has been in the making for more than two years, is led by teams comprised of local citizens and technical experts.

The Highway 62 corridor from Medford to White City experiences some of the heaviest traffic and congestion in southern Oregon. The volume of traffic in the corridor is similar to that found on Interstate 5 north of Medford. According to the Oregon Department of Transportation, traffic on Highway 62 is expected to double in 20 years.

“The teams put a lot of time and energy into this process to reach this milestone,” said ODOT Environmental Project Manager Jerry Marmon.

A technical study of the Split Diamond Alternative and Bypass Alternative is underway for the Draft EIS, which is scheduled for completion later this spring. Once the Draft EIS ready, ODOT will host an open house and open a 45-day public comment period.

“To get to this point, the teams dropped several alternatives that they thought were too disruptive,” Marmon said.

The teams unanimously dismissed the Texas Turnaround and Existing Highway alternatives because of their costs and impacts to existing businesses.

“We’ve reached out to the businesses and industrial users on the north and south parts of the corridor last year and received some excellent feedback,” ODOT Project Leader Debbie Timms said. “We also received good feedback during the September (2006) open houses, where a majority of people stated they liked the Split Diamond.

“We’ll take that same approach with meeting stakeholders near Vilas Road and near White City, sharing the footprint with them and listening to their concerns.” The corridor alternatives allow through traffic to travel on an access-controlled highway, leaving Highway 62 as it currently is with full access to streets and driveways.

The design concepts are available online at the Highway 62 Corridor Web site, www.oregon.gov/odot/hwy/region3. 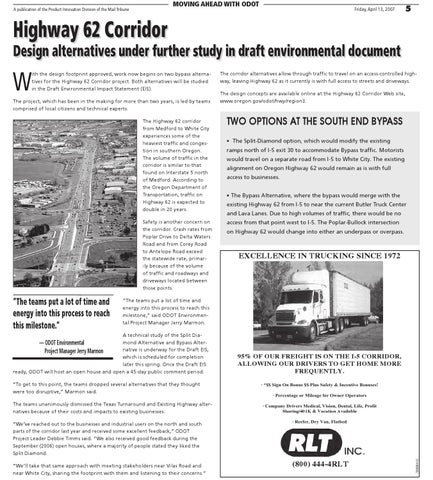