Three is a magic number. The third year is the charm for development of the Fern Valley Interchange project as it enters an important phase; the study of two design alternatives in the federally-required environmental assessment (EA).

By later this year, the project will have evaluated the two design alternatives — a mix of previous concepts and those submitted by the Phoenix Association of Business and Property Owners — within the EA.

The Fern Valley Interchange experiences traffic congestion throughout the day, especially during the morning and afternoon commute. New and proposed development on the east side of Interstate 5, and development growth within the Rogue Valley, is choking the interchange’s capacity and causing safety concerns.

Both teams, the Fern Valley Citizens Advisory Committee and Project Development Team, narrowed the alternatives to two design concepts at their February 2007 meetings.

“We jumped a major hurdle with the Fern Valley teams by forwarding the PBA West, Crossing Diamond and two east side alternatives,” said Jerry Marmon, environmental project manager for the Oregon Department of Transportation. “The two east side designs are different in how North Phoenix Road and Fern Valley Road connect.”

“This type of interchange design is under consideration elsewhere, so we thought we should present another alternative,” said ODOT Area Manager Art Anderson.

A new design concept for Oregon, the Crossing Diamond Interchange directs drivers to the left side of the bridge, similar to being on a one-way street, to cross the interstate.

Compared to a standard diamond interchange, the Crossing Diamond Interchange moves traffic quicker because it reduces the number of stops thus improving efficiency. They are also less disruptive to established businesses near the interchange. The width of the over-crossing structure is typically less than that required for a conventional diamond interchange.

Once the draft EA is completed, a 30-day public comment period will be scheduled to collect feedback. During the comment period, ODOT will host an open house and public hearing to hear concerns. Public comments will be addressed in the Revised EA. Then, the teams will vote for an alternative. Construction could begin as soon as 2010.

For more information about the Fern Valley Interchange project, go online to www.oregon.gov/ODOT/HWY/REGION3. 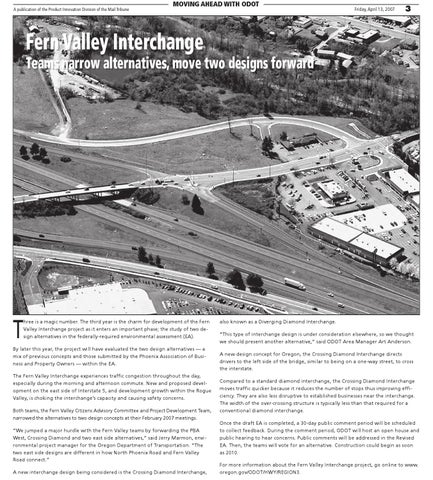