The Oregon Department of Transportation’s live talk show, Moving Ahead with ODOT, will provide a look at what’s on the summer construction schedule around the Rogue Valley. The program airs live on Wednesday, June 13 at 6 p.m. on Rogue Valley Community Television government channels 30 (Jackson County) and 14 (Josephine County).

The program features a call-in segment that offers viewers the opportunity to discuss transportation issues. Viewers can participate by dialing the program call-in number: 541-552-6079.

Rebroadcast dates and times are available on the RVTV Web site: www.roguetv.org.

With the volume of highway construction nearly doubling over the past five years in Oregon, drivers have become accustomed to seeing orange signs alerting them of work zones.

“Highway construction is one of the most dangerous jobs in the country,” said Matt Garrett, director of the Oregon Department of Transportation. “But something that surprises everyone is that the people who get hurt in work zones are more often the drivers and their passengers than the road workers.”

The number one thing drivers can do to improve safety while driving is “be alert” — the single biggest factor in crashes is driver inattention. The other contributing factor is speed, which is why work zones have lower speed limits. ODOT’s current campaign to educate drivers and encourage safety is “Slow down. Better roads ahead.” appearing on billboards, bus boards, on radio and television, and now traveling Oregon’s highways on ODOT’s fleet trailer.

Here are some tips for driving safely in work zones:

Expect the unexpected — Normal speed limits may be reduced, traffic lanes may be altered, and people may be working on or near the road.

Slow down — Speeding is one of the major causes of work zone crashes.

Don’t tailgate — Keep a safe distance between you and the car ahead of you. The most common crash in a highway work zone is the rear end collision.

Keep your distance — Keep a safe distance between your vehicle and the construction workers and their equipment.

Pay attention to the signs — The warning signs are there to help you and other drivers move safely through the work zone. Observe the posted signs until you see the one that says you’ve left the work zone.

Obey road crew flaggers — The flagger knows what is best for moving traffic safely in the work zone. A flagger has the same authority as a regulatory sign, so you may be cited for disobeying his or her directions.

Stay alert and minimize distractions — Dedicate your full attention to the roadway and avoid changing radio stations or using cell phones while driving.

Keep up with the traffic flow — Motorists can help maintain traffic flow and posted speeds by merging as soon as possible. Don’t drive right up to the lane closure and then try to barge in. 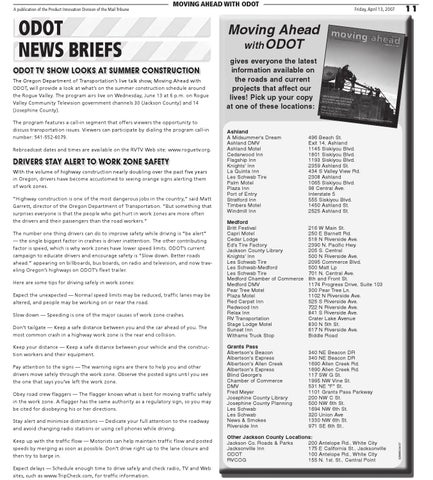