A three-mile section of Highway 99, south of Ashland will receive a makeover this summer.

Highway 99 between Walker Avenue and Interstate 5 will receive a new layer of asphalt, as well as new sidewalks in certain areas. The $2 million project improves the existing portion of Highway 99. The new roadway will be asphalt. The part of the existing roadway that is concrete was once the main Pacific Highway before Interstate 5 was constructed in the early 1960s.

In addition to applying new pavement, the project improves bicycle and pedestrian access on the highway between Walker Avenue and I-5.

Before new asphalt can be applied, sections of the existing concrete roadway need to be removed and improved. That means there will be several days and nights prior to main construction when Highway 99 will be reduced down to a single lane with traffic control provided by flaggers.

Project contractor, LTM, Inc. will begin work June 1 on the 90-day project. The contractor will be limited to work only during the daytime hours, beginning at 8 a.m. and ending at 7 p.m., Monday through Friday.

Now that spring has arrived, construction is shifting into the dirt at the Seven Oaks (Blackwell Road) interchange along Interstate 5 exit 35, north of Central Point.

“Ross Brothers Construction worked on the bridges during the winter months, said ODOT Project Manager Tim Fletcher. “Now, they’ll be moving soil again for the bridge approaches and beam sets for those structures.”

The existing Blackwell Road overpass is functionally obsolete and traffic volumes are growing in the area. While the interchange remains fairly rural in nature, it is attracting more traffic, especially freight and aggregate trucks.

The $24 million project improves the Seven Oaks or Blackwell Road interchange and replaces the two interstate bridges over the Central Oregon and Pacific Railroad. The project is currently scheduled for completion in 2008.

Despite the rumors of Paul Bunyan’s return to southern Oregon, the removal of a swath of fir trees along Highway 199 north of Cave Junction is part of the Highway 199 at Laurel Road project.

The logging operation is being handled by a contract logger for the Oregon Department of Transportation. The work is in preparation for widening nearly a one-mile section of highway from Laurel Road to near River Street in Cave Junction. That widening will accommodate a center turn lane, wider shoulders and construction of a new bridge over George Creek near Laurel Road.

“About half of this $5 million project comes from developers in the corridor,” said ODOT Area Manager Art Anderson. “Without these private contributions, the state dollars would have only addressed some of the safety and operational issues we have in the area.”

Motorists should expect some short delays during construction. The project is scheduled to wrap up in 2008. 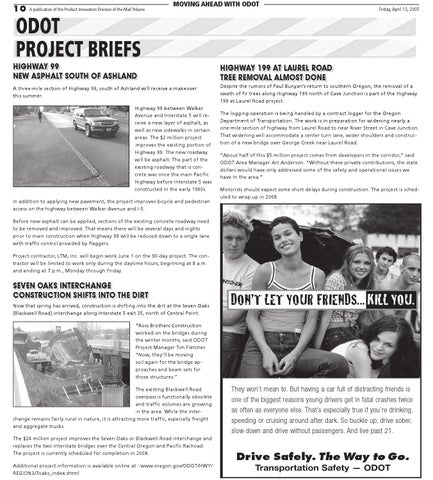