Construction work for the new South Medford Interchange will expand to include Highland Drive in June.

This construction phase focuses work between Barnett Road and Greenwood Street. The work involves replacing the bridge over Lazy Creek and widening Highland Drive south of the bridge.

During construction, Highland traffic will use Greenwood Street and Ellendale Drive. Drivers will be encouraged to use alternate routes. The Oregon Department of Transportation anticipates this phase will be completed in late August.“Closing Highland allows the contractor to expedite this construction phase,” said ODOT Public Service Representative Bill Boyett. “That will be good for nearby residents and motorists.”

“In early May, we’ll begin distributing ‘door hangers’ to residents in the Highland, Greenwood and Ellendale neighborhoods.”

Project contractor, Wildish Standard Paving of Eugene, should have made the transition to the north side of Barnett Road by the time work begins on Highland Drive.

According to Boyett, who’s been busy canvassing the nearby businesses and medical centers, the utility and construction work on the south takes about six months to complete. Once this phase is complete, the crews will switch to similar work on the north side of Barnett Road.

Worker safety and maintaining traffic flow are at the top of Boyett’s objectives.

“At all times, we are trying to accommodate two lanes of traffic in each direction,” Boyett said, “even though we are limiting access to right in-right out only in that section.”

Meanwhile, on Interstate 5, work proceeds with the new bridges over Bear Creek.

Last October, northbound traffic was moved to a temporary bridge over Bear Creek, so workers could remove the old northbound structure. Now, the beam work is proceeding for the new northbound bridge.

Once the new northbound bridge is finished, workers will temporarily move southbound traffic onto it so the existing southbound structure can be replaced.

The $70 million South Medford Interchange project went to bid in Spring 2006 after more than seven years of development. It is the Rogue Valley’s largest state highway project since Interstate 5 was built.

Construction updates and a video are available online at, http://www.oregon.gov/ODOT/HWY/REGION3/. The Web site also shows how the SPUI operates. 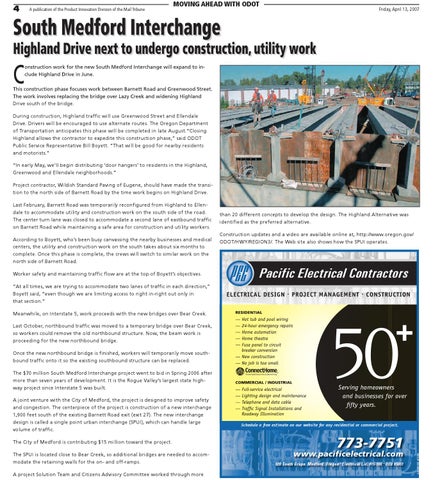