With the project footprint set, work is underway on two Bypass Alternatives for the Highway 62 Corridor. The project, under development now for more than two years, will now be studied in the Draft Environmental Impact Statement (DEIS). The federally-required DEIS is scheduled for release later this fall.

The project development process is led by two teams, one comprised of local citizens andstakeholders and the other with technical staff.

‘We’ve reached out to the businesses and property owners in the Vilas Road and Peace and Justice Road areas,’ said ODOT Environmental Project Manager Jerry Marmon. ‘The meetings were very benefi cial to our project teams.ings The result of those meetings was that we have changed parts of the proposed footprint to reduce the project’s impacts.’

Marmon cited for example that earlier design alternatives had Justice Road going over the bypass. That design approach had significant property and homeowner impacts. Now, the bypass will go over Justice Road, reducing those impacts. Similarly, changes have been made in the area of the proposed Vilas interchange.

The corridor alternatives would allow through traffic to travel on an access-controlled highway and leave Highway 62 as it currently is with full access to streets and driveways.

THE TWO OPTIONS AT THE SOUTH END TO THE BYPASS ARE:

The Highway 62 corridor from Medford to White City experiences some of theheaviest traffic and congestion in southern Oregon. The volume of traffic in thecorridor is similar to that found on Interstate 5 north of Medford. And Highway 62traffic is expected to double in 20 years.

The concepts are available online at the Highway 62 Corridor project web site,www.oregon.gov/odot/hwy/region3. 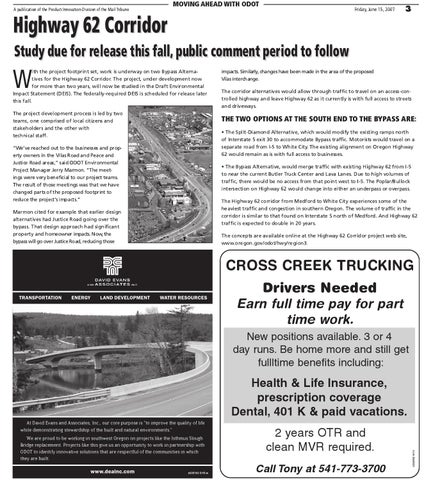