Former Oregon Congressman Bob Smith was recognized at a June 12 morning presentation near the Highway 62 overpass and Biddle Road for his contribution to the North Medford Interchange project.

Smith, who represented southern Oregon in Congress for 14 years, worked to gain a $19 million earmark for the North Medford Interchange project.

‘I had an opportunity and responsibility in Congress to select one of the most important transportation projects in my district,’ said Smith, who represented 22 Oregon counties while in Congress. ‘And that was this project, critical to freight from the interstate into central Oregon.’

Construction began in 2004 for the $36 million modernization project. The project was designed to make safety and traffic flow improvements to the east side of the Interstate 5 interchange (exit 30) that links I-5 and Oregon Highway 62, locally known as Crater Lake Highway.

‘The interchange works,’ said Oregon Department of Transportation Area Manager Art Anderson. ‘Highway 62 traffic flows more easily, and we don’t have the backups we used to regularly experience on the northbound ramp of Interstate 5. All these problems were solved by this project.’

The North Medford Interchange project widened the Highway 62 bridge over Biddle Road; removed the Medco Haul Road over-crossings; and built new on- and off-ramps for northbound I-5 traffic. Poplar Drive was reconstructed and a new, signalized intersection was installed for both Fred Meyer and Poplar Square.

Aesthetic features were also added as part of the interchange project, in addition to a comprehensive interchange landscaping plan. 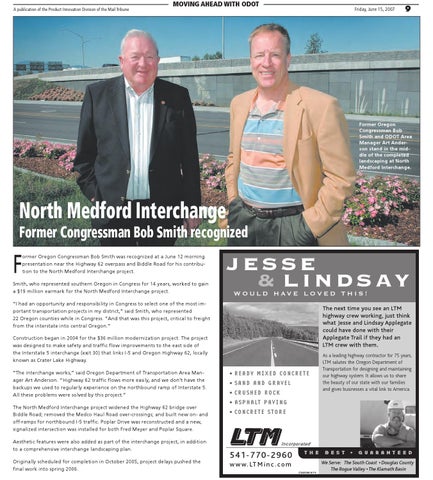