Technical reports are being prepared for the Fern Valley Interchange project, an important step in writing the federally-required Environmental Assessment (EA).

Later this year, the project will release the Draft EA, evaluating two alternatives — a mix of previous concepts and those submitted by the Phoenix Association of Business and Property Owners.

Once the Draft EA is complete, the Oregon Department of Transportation will hold a 30-day public comment period. During this period, ODOT will host an open house and public hearing to hear public concerns. Then, the project teams will vote on the alternatives. Construction could begin as soon as 2010.

Construction is moving into summer work at the Seven Oaks (Blackwell Road) interchange along Interstate 5 exit 35, north of Central Point.

With the drier conditions, the prime contractor, Ross Brothers, is pushing and compacting fill that will make up either side of the new I-5 over-crossing.

Work is nearly fi nished on the first of two bridges that span the nearby Central Oregon and Pacific Railroad rail line. By late summer, northbound traffic will move onto the new structure so work can begin on replacing the existing northbound bridge.

The $24 million project is scheduled for completion in 2008.

The Oregon Department of Transportation is replacing bridges along Interstate 5 north of Central Point near the Jackson County Expo grounds.

Later this summer, construction crews will begin building a new Upton Road bridge over Bear Creek. traffic will be able to use the bridge during construction.

The other Upton Road Bridge, the one spanning I-5, is scheduled to be closed and demolished beginning in October. The bridge closure will hasten construction of the new bridge, which should open in May 2008. Central Point traffic will need to use Penninger Road and the Pine Street over-crossing as the local detour.

The new Upton Road Bridge spanning I-5 will feature bike lanes and sidewalks. The new bridge over Bear Creek will feature the same bicycle and pedestrian amenities, but will also include a west-bound, left-turn refuge for Penninger Road.

Major Work Begins on Highway 99-Walker to I-5 Project

A three-mile section of Highway 99 south of Ashland is getting a makeover this summer. Project contractor, LTM, Inc. began work this month and is scheduled to be finished by the end of August.

Before new asphalt can be applied, sections of the existing concrete roadway need to be removed and repaired. That means there will be several days and nights prior to main construction when Highway 99 will be reduced to a single lane with traffic control provided by flaggers. Motorists are advised to drive with caution in the work zone.

Once the main work begins, the contractor will be limited to daytime hours, from 8 a.m. to 7 p.m., Monday through Friday. 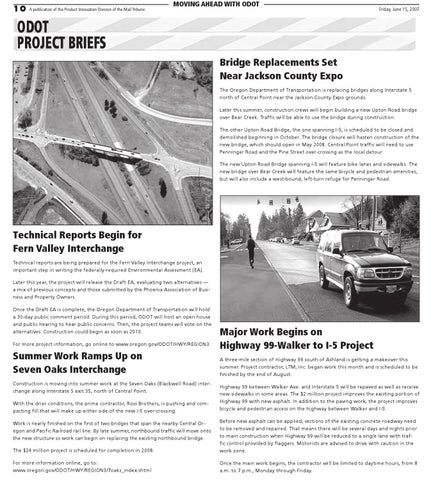