The August 16 workshop was held to receive feedback on the latest work – development of Interchange Area Management Plans (IAMPs) – developed by the citizens group.

The IAMPs will look at computer models of current and future traffic conditions at both I-5 interchanges. Once those models are complete, the citizens group will examine different management tools to ensure safe and efficient movement of traffic through the year 2030.

‘There’s a lot of local interest in these interchanges,’ said ODOT Long Range Planner John McDonald. ‘We appreciate the energy and input from local residents. Because interchanges are very expensive, we want to make sure they last a long time.’

The next public workshop is tentatively planned for winter, after completion of the draft IAMP.

The citizens group has been meeting regularly since March to work on the IAMPs. Meetings are expected to continue through the end of the year. For more information about an upcoming meeting, contact John McDonald at (541) 957-3688.

The Oregon Department of Transportation currently has scheduled both bridges for replacement in 2009. The project is part of the Oregon Transportation Investment Act (OTIA), a series of funding packages passed by the Oregon Legislature beginning in 2001, providing $2.96 billion for highway and bridge construction through 2012.

To prepare for the bridge replacements, ODOT is working with local citizens and staff from the City of Ashland and Jackson County to develop IAMPs for the exit 14 and exit 19 interchanges and surrounding areas.

The IAMPs are separate from the actual design and construction of the project. Details on the look of the new interchange, number of lanes across the interstate and aesthetic treatments will come at a later time with input from local stakeholders and the City of Ashland.

What is an IAMP? 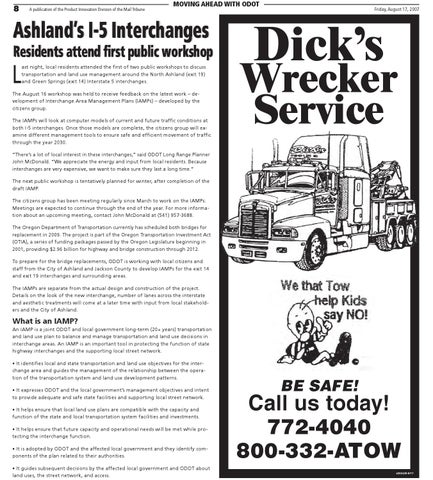