With the footprint set, work is beginning on two Bypass Alternatives for the Highway 62 Corridor project, which has been in the making for more than two years by a citizen and technical team. These will now be studied in the Draft Environmental Impact Statement (EIS).

The federally-required DEIS is scheduled for release later this fall.

‘We’re continuing our outreach to businesses and property owners,’ said ODOT Environmental Project Manager Jerry Marmon. ‘As a result of those meetings, we have changed the proposed footprint to reduce project impacts.’

Changes have been made in the area of the proposed Vilas interchange. Now the teams are considering a Single Point Urban Interchange (SPUI), similar to what is currently being constructed at south Medford Interchange.

The corridor alternatives would allow through traffic to travel on an access-controlled highway and leave Highway 62 as it currently is with full access to streets and driveways.

The two options at the south end to the Bypass are: 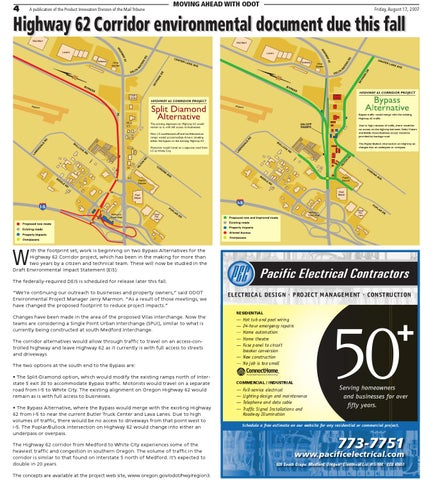