The summer sun was beating down on a new asphalt parking lot at the Medford Airport where Governor Ted Kulongoski had just flown in to sign the Connect Oregon II legislation. He and other officials gathered to celebrate the second round of investment in Oregon’s rail, transit, air and marine modes of transportation with an additional $100 million in lottery-backed bonds.

At the Medford Airport, officials are hoping for an encore of the nearly $5 million secured to pay for a new freight apron, designated area for cabs, busses and shuttles. The funds also paid for the new parking lot where the governor signed the legislation August 1, overseen by several southern Oregon legislators and the chairs of both the House and Senate Transportation Committees.

This is not just about pouring more concrete,’ said Kulongoski. It’s about looking at other modes of transportation that will help Oregon’s economy and livability.’

Kulongoski said the first ConnectOregon funded needed multi-modal projects, and a second round of lottery bonds will continue those programs.

I’m directing ODOT to fast track these applications so we can expedite the projects and get the benefits to Oregonians as soon as possible,’ he said.

In 2005, the Oregon Legislature authorized $100 million for Oregon’s Multimodal Transportation Fund to invest in air, rail, marine and transit infrastructure. This first authorization, also known as ConnectOregon I, currently has 41 projects in varying stages of design and construction. Three of the projects are complete.

ODOT has diligently delivered the first ConnectOregon program,’ said Oregon Transportation Commission Chairman Stuart Foster of Medford. And it stands ready to do it again.’ 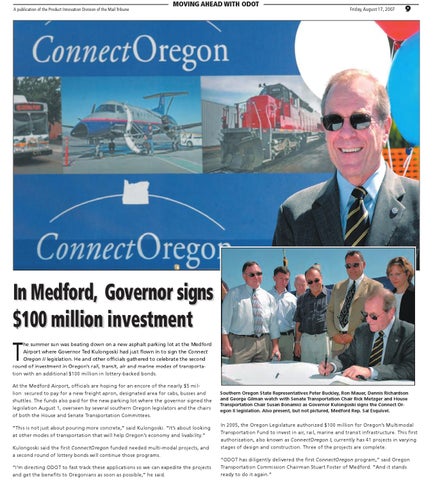