Construction for the new South Medford Interchange is in full swing this summer throughout the project area, from Highland Drive on the east to Highway 99 to the west.

Highland Drive is still closed for the widening of the roadway and replacement of the Lazy Creek bridge. Work on this section is scheduled for completion by the end of August.

‘With the reconstruction on Highland and detour onto Ellendale plus the switch of construction to the north side of Barnett, traffic overall seems to be moving very well,’ said ODOT Public Service Representative Bill Boyett.

Much of the work recently has focused on the interstate bridges and west side, said Boyett.

Northbound traffic will remain on a temporary bridge until this southbound structure is complete.

Foundation work is also continuing on the west side for the new interchange pedestal wall. Also on the west side, roadway work continues for the interstate connector road to the realigned Center Drive and Highway 99.

It was a year ago the $70 million South Medford Interchange project went to bid after more than seven years of development on the Rogue Valley’s largest state highway project since Interstate 5 was built.

Construction updates and a video are available on the project Web site, www.oregon.gov/ODOT/HWY/REGION3. 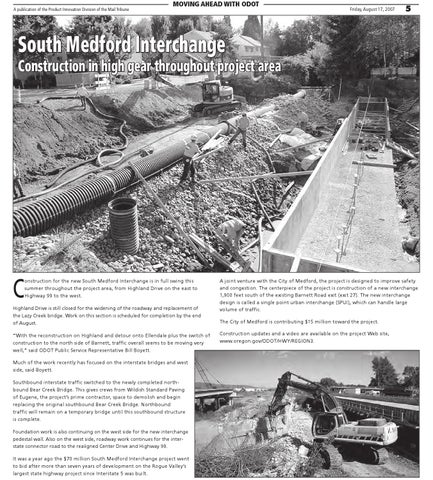