After a busy summer of local roadway construction, several parts of the South Medford Interchange project are wrapping up this season.

Some of the recent milestones include the re-opening of a pedestrian-friendlier Highland Drive, the replacement of Lazy Creek Bridge, and the footprint of Barnett Road is now ready for the final top lift of asphalt.

“The top lift of asphalt is weather dependent,” said ODOT Public Service Representative Bill Boyett, “but we’re confident we can get it done this year.

“Motorists have been great. They’ve been patient and understanding for the most part. We got through the summer in fine shape and we appreciate everyone bearing with us on this part of the project.”

There’s still a lot of work to be done on both sides of Interstate 5.

In the interchange area, crews are constructing the new northbound off-ramp and new southbound on-ramp. The original southbound I-5 bridge over Bear Creek has been demolished. Crews are working on rebuilding the replacement bridge outside of the creek bed to conform to current flood control and environmental regulations.

On the east side of I-5, crews are continuing to work on the bridges and decks connecting Barnett Road and the new interchange.

On the west side of I-5, crews are continuing to compact soil that will make up the east portion of the interchange. That also includes the connector road from the interstate to Highway 99 and a new realigned Center Drive.

The $70 million South Medford Interchange project went to bid in Spring 2006 after more than seven years of development. It is the Rogue Valley’s largest state highway project since Interstate 5 was built.

The City of Medford is contributing $15 million toward the project, which is the Rogue Valley’s largest state highway project since I-5 was built 45 years ago.

According to Project Information Specialist Gary Leaming, a video is available on the project Web site, http://www.oregon.gov/ODOT/HWY/REGION3/smi_index.shtml, which shows how the SPUI operates.

“The web site helps keep the public informed about the new interchange design and the ongoing construction work,” Leaming said. 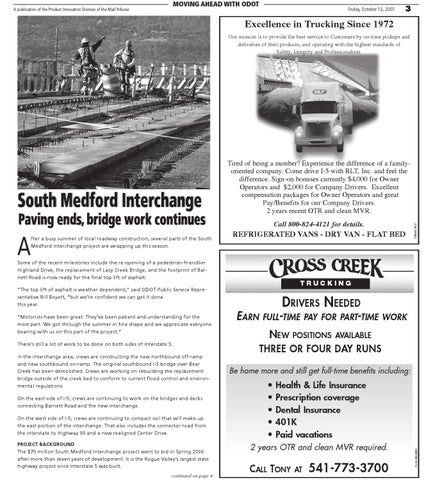