Major bridge repair and replacement projects are currently under construction or are scheduled to begin along Interstate 5 from Eugene south to the California border. Developed to allow an unobstructed flow of goods and services during construction, each project consists of several bridges bundled together.

‘There’s a tremendous amount of construction work ahead of us,’ said ODOT Area Manager Art Anderson. ‘This work in southern Oregon is the third stage in a five-stage plan that will keep commerce flowing throughout key freight corridors—especially along Interstate 5.’

‘Granted, many of these bridges are relatively unknown, but the sheer number of bridges scheduled for repair or replacement requires significant coordination to ensure we minimize impacts to motorists and commercial freight.’

The projects are funded through the $2.46 billion Oregon Transportation Investment Act of 2003. The legislation provides $1.3 billion to repair or replace hundreds of aging state-owned bridges in Oregon, known as the OTIA III State Bridge Delivery Program.

The Oregon Legislature directed the agency to outsource the work, stimulating the economy by creating and sustaining additional jobs for Oregonians. Although the Oregon Department of Transportation has outsourced work on projects before, this is the first time the agency has turned a program of this magnitude over to the private sector to manage.

Currently underway, this project replaces two I-5 bridges and repairs another between Rogue River and Central Point as well as replaces one bridge on Upton Road near Central Point. The construction work requires closure of Upton Road spanning I-5 to quickly replace the I-5 overpass and Bear Creek Bridge. The overpass was successfully demolished in October.

Foley Lane under I-5 is undergoing a brief closure to allow construction to focus on the demolition of the I-5 overpass.

Scheduled to begin construction in late 2008, this project repairs five aging bridges on I-5 between Gold Hill and Rogue River. In response to public input, the project will improve access for the Valley of the Rogue State Park, including bike trail extensions, walkways and aesthetic features on the bridges.Construction work is being designed to allow recreational river use with construction stopping during the busy summer tourist season. The bridges in this bundle (#16-20 on the map) are scheduled for completion in 2010.

Scheduled to begin construction in late 2009, this project will replace the Ashland exit bridges at exit 19 and exit 14. Design work begins in early 2008 (see sidebar).

Construction is already underway on this project, which will repair six I-5 bridges and replace two others in Josephine County. I-5 bridges that are being repaired:

New northbound and southbound I-5 bridges are currently under construction over Beacon Drive. The construction work has reduced I-5 to one lane in each direction. Drivers are advised to use caution in the work zone. The bridges in this bundle (#2-8 on the map) are scheduled for completion by April 2009.

Scheduled to begin construction in 2008, this project will replace three aging I-5 bridges – the east Grants Pass interchange bridge, and the northbound and southbound bridges over Merlin Road.The bridges in this bundle (#9-11 on the map) are scheduled for completion in mid-2010.

Scheduled to begin construction in April 2008, this project will replace five aging I-5 bridges.

The bridges scheduled for replacement in this bundle are:

Two lanes of traffic in both directions will be maintained during construction. During replacement of the bridge spanning Neil Creek Road, slow-moving trucks on I-5 will not be allowed to use the southbound freeway shoulder as a climbing lane between milepost 10 and milepost 11. A temporary closure of Neil Creek Road will occur during demolition of the old bridge. 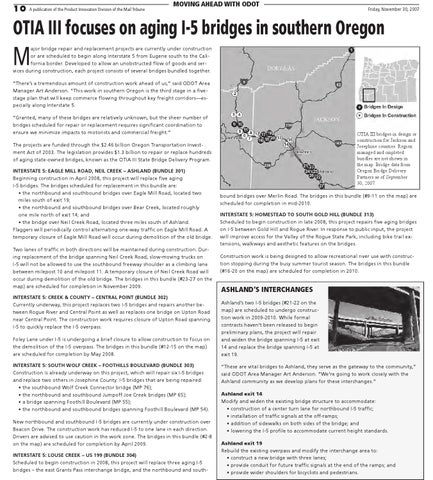