Fern Valley InterchangeEnvironmental Assessment on schedule for release next year

A third year of design work is nearly complete on the Fern Valley Interchange. The federally-required Environmental Assessment, currently under review, is scheduled for release in early 2008.The Fern Valley Interchange experiences traffic congestion throughout the day, especially during the morning and afternoon commute. New and proposed development on the east side of Interstate 5, and development growth within the Rogue Valley, are choking the interchange’s capacity and causing safety concerns.

The purpose of the Draft EA is to evaluate the two design alternatives — a mix of previous concepts and those submitted by the Phoenix Association of Business and Property Owners.Once the draft EA is complete, a 30-day public comment period follows, which includes plans for an open house and public hearing. Public comments are included and addressed in the Revised EA. Then, the project teams vote for an alternative to build.

On a separate track, the Fern Valley Interchange Area Management Plan (IAMP)currently is the subject of monthly meetings.

Based on the results of the analysis, the study may recommend changes to allowable land uses near the interchange, or changes to the local street network and nearby intersections.

‘Our planners are working with members from the Fern Valley Citizens Advisory Committee to finish the IAMP, which will guide the land uses and zoning near the interchange for the future,’ said Project Leader Dick Leever. ‘The process seems long but we’re making good headway.“Our consultant is wrapping up the project’s technical reports. That will be the basis for the Draft EA.’

The need for a new Fern Valley interchange is becoming more acute. A short-term maintenance project at the Talent overpass added more traffic to the Phoenix interchange.

‘Our technicians are adjusting the signals to give Fern Valley traffic twice as much green time as the ramp traffic,’ said Leever. ‘We considered the added expense of modifying the bridge to the tune of at least $100,000 but it didn’t pencil out since it would be all thrown out once the new construction project begins.

‘It just shows we need to get this project built.’The current schedule calls for interchange construction to begin as soon as 2010. For more project information, go online to www.oregon.gov/odot/hwy/region3. 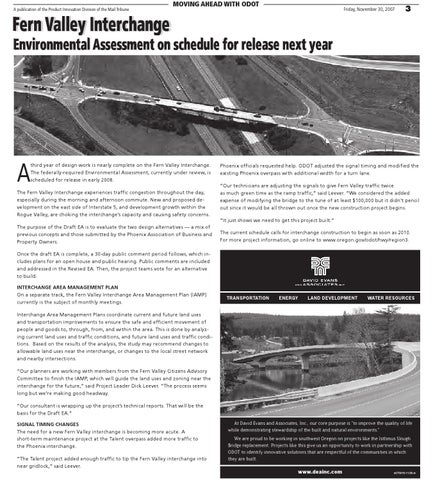