Hamilton Construction of Springfield was recently awarded the Golden Salmon for environmental sensitivity during a project that replaced four bridges along the Redwood Highway (US 199), between Cave Junction and the California border.The Golden Salmon award presentation was held at a Rogue Valley Area Commission on Transportation meeting in Grants Pass. ODOT Biologist Ken Cannon and Project Manager Joe Thomas led the presentation. Kate Robarge received the award on behalf of Hamilton Construction.

‘This project had a full suite of environmental challenges,’ Cannon said. ‘Within the project limits, we identified migratory birds, Townsend’s bats, federal and state-listed endangered plants and Coho salmon.’

According to Cannon, Hamilton Construction demonstrated success in minimizing impacts to water quality in light of significant in-water work periods required for the bridge replacement project.

‘We wanted to recognize the company for its sensitivity and care regarding all of these environmental issues,’ Cannon said. ‘Hamilton’s Project Manager Wendell Snook was instrumental in the project’s success. Wendell was proactive and attentive to environmental issues; he’s an asset for Hamilton Construction and for Oregon natural resources.’

The bridges, which span the Illinois River and its tributaries, were either functionally obsolete or suffered from cracks that put them in danger of being weight limited. The Rough and Ready Bridge was replaced on a slightly different alignment, while the three other bridges — Little West Fork, Big West Fork and East Fork — were reconstructed on their original alignment, using temporary bridges to avoid travel delays. The project is scheduled for completion at the end of this year.

‘Highway 199 is a critical economic and tourist link from Interstate 5 to the Oregon Coast,’ Thomas said. ‘These bridges were built with virtually no delays to travelers.’

Sno-Parks are located throughout Oregon’s mountain passes and in most ski, snowmobile and snow play areas. Each is posted with signs that identify them as a Winter Recreation Area.

Anyone who parks in a Sno-Park between Nov. 15 and April 30 needs a valid Sno-Park permit displayed on the windshield of their vehicle. Sno-Park permits are available at local DMV offices and from permit agents at winter resorts, sporting goods stores and other retail outlets. An annual permit costs $20, a three-day permit is $7, and a daily permit is $3, although agents are allowed to charge an additional service fee for each permit they sell. Annual permits are also available by mail from DMV headquarters in Salem.

Oregon honors Sno-Park permits issued in Washington, California, or Idaho. Oregon permits are honored in those states. Vehicles with Washington plates, however, must have a Washington permit to park in a Washington Sno-Park. Parking in an Oregon Sno-Park without a valid permit may result in a $30 fine.

Revenue collected from sales of Sno-Park permits pays the cost of plowing snow in the parking areas. 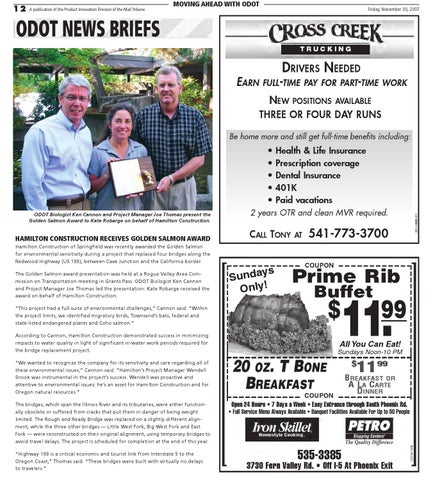