The bustle of activity known as the South Medford Interchange — summer excavation and paving — is scaling back for the winter season to focus primarily on bridge work.

Wildish Standard Paving and its subcontractors will focus on the interchange area and the Highland Drive and Garfield Street connectors, which feed vehicles to the new interchange’Wildish continues to stay ahead of schedule on major project segments,’ said ODOT Public Service Representative Bill Boyett. ‘The project is really starting to take shape. Local motorists are beginning to get a sense of the size of this project.’

In the interchange area, construction crews are working on the new northbound and southbound off-ramps. Crews are also rebuilding the new southbound Bear Creek Bridge on Interstate 5. The new bridge will span the creek to conform to current flood control and environmental regulations.

Other ongoing work includes soil compaction that will make up the east portion of the new interchange. The work also includes the connector road from Interstate 5 to Highway 99 and a realigned Center Drive.

Other work still on tap includes:

According to Boyett, the Bear Creek Bridge replacement work will occur under a full closure so that it can be finished as quickly as possible.

The South Medford Interchange project went to bid in 2006 after more than seven years of development. The project has the distinction of being the largest state highway project in the Rogue Valley since Interstate 5 was built.

The centerpiece of the project is construction of a new interchange 1,900 feet south of the existing Barnett Road exit (exit 27). The new interchange design is called a single point urban interchange (SPUI), which can handle large volume of traffic.

A project Solution Team and Citizens Advisory Committee worked through more than 20 different concepts to develop the design. The Highland Alternative was identified as the preferred alternative.According to Project Information Specialist Gary Leaming, a video is available online at www.oregon.gov/odot/hwy/region3, which shows how the SPUI operates.

The web site helps keep the public informed about the new interchange design and the ongoing construction work,” Leaming said. 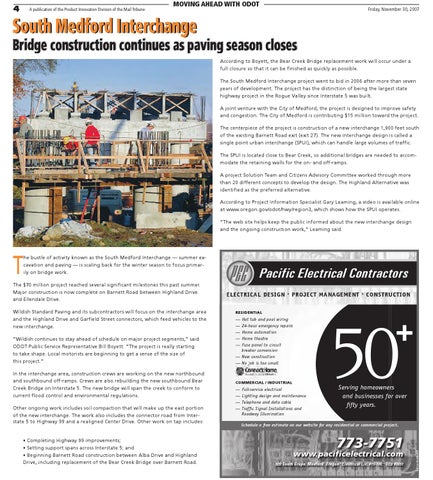