A third alternative is currently under review by the U.S. Highway 199 Expressway project team for the important transportation link between Interstate 5 and the California border.

Following examination by the City of Grants Pass and other stakeholders, the Project Development Team voted to include the ‘Working Group Alternative’ in the Supplemental Environmental Assessment (SEA), which is scheduled for release in December.

‘The SEA will look at the three remaining alternatives side by side,’ said ODOT Environmental Project Manager Jerry Marmon. ‘Once the document is released, we’ll launch a 30-day, public comment period. During this time, we’ll host an open house on the project, which will provide people an opportunity to weigh in on the project and the alternatives.’

The Working Group consists of a combination of staff from the City of Grants Pass and various local stakeholders. The Working Group developed the design after extensive work earlier this year. The alternative they produced will be compared with previous eastside alternatives ‘A’ and ‘C’ on how best to handle the increasing traffic and safety concerns in the corridor near the Josephine County Fairgrounds for the next 20 years.

The Highway 199 Expressway project focuses on the area near the South Y in Grants Pass and extends more than four miles west to Midway Avenue.

Marmon said that while the comment period is important, it doesn’t mean the most popular alternative will be approved.’There are long-term considerations we need to look at, such as how does the alternative adjust to future growth,’ Marmon said.

In 2006, the project teams – the Citizens Advisory Committee and the Project Development Team – voted unanimously to forward Alternatives ‘A’ and ‘C’ into the Environmental Assessment.This $12 million project includes a $2 million federal earmark. Construction on the west side is scheduled for next year. The east side work is scheduled to begin in 2009.

Public comments, concept alternatives, and those dismissed, are available for viewing on the web at: www.odot.state.or.us/region3. 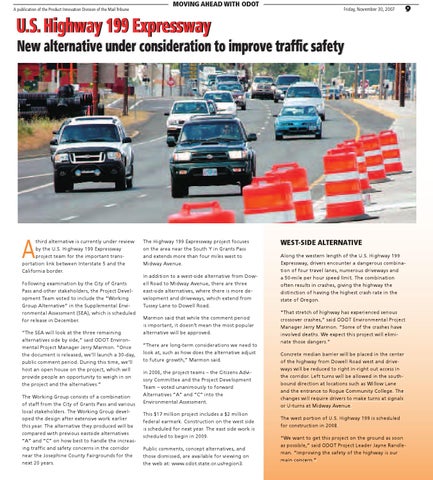