Another visually-striking phase of the $70 million South Medford Interchange project will occur in March but only when most eyes are closed.

On March 17, nighttime detours on Interstate 5 will begin for the placement of 40 concrete beams. From 10 p.m. to 4 a.m., I-5 traffic will detour onto Highway 99 between the current Barnett Road interchange and Talent. The detours are scheduled to run every other night until all 40 beams are delivered.

Arriving from a pre-cast beam plant in Harrisburg, each beam is 136-feet long and weighs about 104,000 pounds. Prime contractor Wildish Standard Paving of Eugene will use the bridge beams for construction of a new six-lane road that will spans I-5 at the new interchange.

‘These beams will really get drivers’ attention the morning after placement,’ said ODOT Project Manager Joe Thomas. ‘These beams aren’t as big as the ones we used last spring, but the size is large enough that transporting them down I-5 still requires significant coordination and staging.’

‘For us, this event signals the overall project is that much closer to being finished.’

Local law enforcement agencies, the Oregon State Police and the Oregon Department of Transportation will monitor the six-mile detour through south Medford, Phoenix and Talent.

‘We’ve met with the local communities and emergency service responders to make sure this is as seamless as possible,’ said Thomas.

After nearly 20 months of construction, Wildish continues to stay ahead of schedule. The past winter was focused on bridge beam placements for the new southbound I-5 bridge over Bear Creek as well as the adjacent southbound on-ramp.

The centerpiece of the South Medford Interchange project is construction of a new interchange 1,900 feet south of the existing Barnett Road exit (exit 27). The new interchange design is called a single point urban interchange (SPUI), which can handle large volume of traffic. The SPUI is located close to Bear Creek, so additional bridges are needed to accommodate the retaining walls for the on- and off-ramps.

The project is designed to improve safety and congestion in south Medford. The City of Medford is contributing $15 million toward the project.

According to Project Information Specialist Gary Leaming, a simulation video is available online that shows how the SPUI operates.

‘The web site helps keep the public informed about the new interchange design and the ongoing construction work,’ Leaming said. 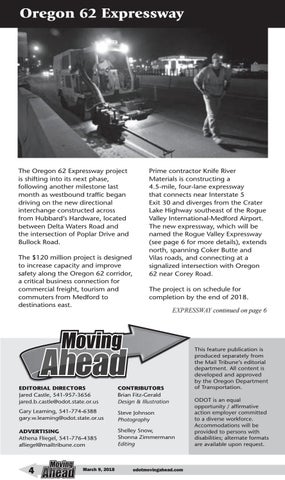