The biggest piece of the South Medford Interchange project lies ahead

The last piece of major construction for the $70 million South Medford Interchange – the replacement of the Barnett Road Bear Creek Bridge – is also the biggest part of the entire project.

‘Our engineers examined ways to rebuild the Barnett Road overpass in the least amount of time and with the fewest impacts to local traffic,’ said Oregon Department of Transportation Project Manager Joe Thomas.

According to Thomas, temporary bridges were not a viable solution for this construction phase due to the traffic volumes and expected delays on Barnett Road as well as the additional time that would be added to the overall project schedule. The new bridge will touch down near the Black Bear Diner, which posed additional construction challenges for prime contractor Wildish Standard Paving of Eugene.

‘Wildish knows how important this link is to businesses and residents in south Medford,’ said ODOT Public Service Representative Bill Boyett. He regularly meets with businesses and property owners affected by the South Medford Interchange project.

‘Wildish has managed to stay ahead of schedule through the first 20 months of construction, so I expect them to beat the deadline on Barnett Road, too,’ Boyett said.

The South Medford Interchange project is designed to improve safety and congestion. The centerpiece of the project is construction of a new interchange 1,900 feet south of the existing Barnett Road exit (exit 27). The new interchange design is called a single point urban interchange (SPUI), which can handle large volume of traffic. The SPUI is located close to Bear Creek, so additional bridges are needed to accommodate the retaining walls for the on- and off-ramps. 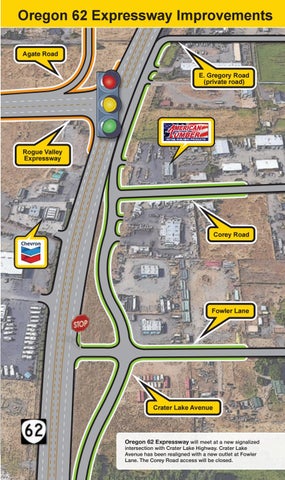