In the District Manager position, Marmon is responsible for the leadership and management of maintenance and operations and oversees all state highways in Jackson and Josephine counties and roughly 100 employees.

“Jerry’s experience working with multiple agencies and communities will serve our maintenance program well,” said Mather. “This position is very challenging, especially in the winter as our maintenance crews work to keep the highways open.”

He replaced John Vial, who left last March to become the director of the Jackson County Roads and Parks Department.

Summer construction is the focus of the next edition of the live TV talk show, Moving Ahead with ODOT.

Moving Ahead with ODOT rebroadcasts several times each month. The dates and times on the RVTV web site: www.roguetv.org.

The new bridge features sidewalks and bike lanes and complements recent work completed by Central Point at the intersection of Upton Road and Scenic Avenue.

“The reopening of this bridge is a significant milestone in this project,” said ODOT Project Manager Tim Fletcher. “This bridge provides sidewalks and bike lanes for kids going to school or using the athletic fields. And it makes it easier for people who want to walk to the Jackson County Fair.”

Work continues through the summer on the Upton Road Bridge that spans Bear Creek. The new bridge will feature a left-turn lane for westbound Upton Road traffic onto Penninger Road.

Shasta Constructors of Redding, California is the prime contractor on the $17 million bundle of bridge projects, which is scheduled for completion in November.

The bridge bundles are designed to provide economies of scale to taxpayers and ease of construction for the contractor.

Oregon’s newest safety campaign is aimed at getting the attention of aggressive car and truck drivers. The Ticket Aggressive Cars and Trucks campaign, or TACT, is designed to reduce truck crashes through education and enforcement. Specifically, TACT focuses on aggressive driving near the vicinity of large trucks.

In the last 10 years, three out of four people who died in these collisions were riding in the cars. In fact, in crashes involving a car and truck, the car occupants are 15 times more likely to be killed than truck occupants. McKane said these are the keys to remember: 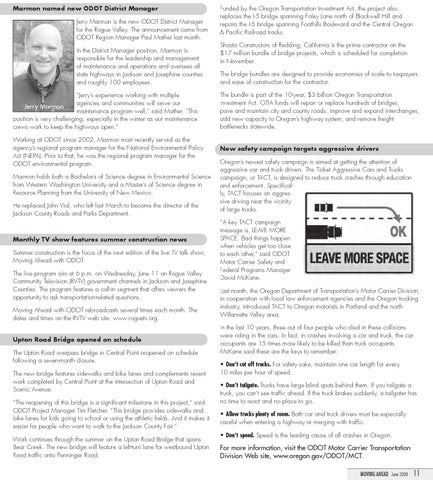