Concrete pumpers are nearly finished disgorging their 170 loads on miles of reinforced steel rebar that makes up the largest of 11 bridges for the South Medford Interchange project.

“That’s what you’ll be seeing this summer,” said ODOT Public Service Representative Bill Boyett. “Bridge work will move ahead and those critical pieces that’ll make the interchange and its connecting road work”.

Meantime, planning for the replacement of the Barnett Road-Bear Creek Bridge continues as the South Medford Interchange project enters its third year of construction.

Over its 60-year lifespan which began as a two lane structure, the Barnett Road-Bear Creek Bridge has experienced higher and higher traffic volumes. Today, more than 35,000 vehicles per day pass over the bridge.

“Our engineers examined ways to rebuild the Barnett Road overpass in the least amount of time and with the fewest impacts to local traffic,” said ODOT Project Manager Joe Thomas.

“We need to get the interchange in operation before we begin this last part of the project. And it looks like that will start early next year.”

According to Thomas, temporary bridges were not a viable solution for this construction phase due to the traffic volumes and expected delays on Barnett Road as well as the additional time that would be added to the overall project schedule. The new bridge will touch down near the Black Bear Diner, which posed additional construction challenges for prime contractor Wildish Standard Paving of Eugene.

The South Medford Interchange project is designed to improve safety and congestion. The centerpiece of the project is construction of a new interchange 1,900 feet south of the existing Barnett Road exit (exit 27). The new interchange design is called a single point urban interchange (SPUI). This design can handle large volumes of traffic. The SPUI is located close to Bear Creek, so additional bridges are needed to accommodate the retaining walls for the on- and off-ramps.

Last March, prime contractor Wildish Standard Paving of Eugene completed the placement of 40 concrete beams for the new six-lane road that spans I-5.

The beams were placed at night to minimize traffic disruptions. I-5 traffic ran a detour to Highway 99 between the current Barnett Road interchange and Talent.

“Because of their size, the beam placement required a significant amount of coordination and staging,” said Thomas. “We had to place beams every other night because of the turnaround time for the drivers to get back to Harrisburg, rest, and reload for the next run.”

Back in April 2007, 36 concrete bridge beams, each in excess of 165 feet and weighing more than 169,000 pounds, were trucked down for the new Bear Creek Bridge.

That structure is now tied with rebar and crews are pouring the new deck that makes up the Highland Connector on the east side of the interstate.

The project is designed to improve safety and congestion in south Medford. The City of Medford is contributing $15 million toward the project.

A project Solution Team and Citizens Advisory Committee worked through more than 20 different concepts to develop the design. The Highland Alternative was identified as the preferred alternative. Construction updates and a video are available on the project Web site, www.oregon.gov/odot/hwy/region3. 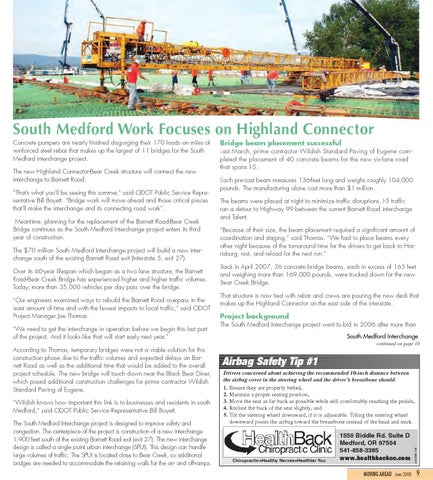