The U.S. Highway 199 Expressway: RCC to Midway project is designed to improve safety issues along more than two miles of the corridor’s west side from the community college to Midway Avenue. This is notorious for being one of Oregon’s most crash-prone sections of highway.

‘We’re very happy to be in construction on this section,’ said ODOT District Manager Jerry Marmon. ‘This west section has been notorious due to the high speeds and crossover crashes, many of which have been fatal.’

The $3 million project will include medians to channel turning traffic and a raised median to deflect any vehicle from crossing into the opposite lanes of travel. U-turns will be accommodated at a new signal at Hubbard and a wider intersection at Midway Ave. All of the work will be contained within existing highway right-of-way.

The entire planning process for the corridor from Midway Ave. to Tussey Lane near the ‘South Y’ reached a major milestone last February when the Project Development Team selected a final design, known as ‘Alternative A.’ The final selection was reached after more than three years of development that included extensive public involvement and the participation of the city of Grants Pass and the local citizens group ACCESS.

The Unit Two project design places three lanes in each direction on U.S. 199 from Tussey Lane to Dowell Road. The project also removes the signals at the Josephine County Fairgrounds and at Redwood Avenue, modifies the Redwood Avenue ramp to allow one-way traffic, and provides better defined access to highway businesses.

According to Project Leader Jayne Randleman, the signal removal is not scheduled to occur until alternative access is provided to the Fairgrounds. U.S. 199 traffic will still have right-in/right-out access to the Fairgrounds after the project is completed.

The Unit Two project, scheduled to begin after 2009, will focus on the east side of U.S. 199 from Hubbard Lane to the South Y.

‘We’re still working to address funding for the Unit Two project before it can progress to construction,’ said Randleman. ‘However, with continued local support, we’ll be able to make further safety improvements to this corridor.’The Project Development Team was comprised of representatives from the city of Grants Pass, Josephine County, a local trucking firm, the Grants Pass Chamber of Commerce, the Oregon State Police, ODOT and a Grants Pass citizen at large.Additional project information is available online at www.odot.state.or.us/region3public/hwy199/. 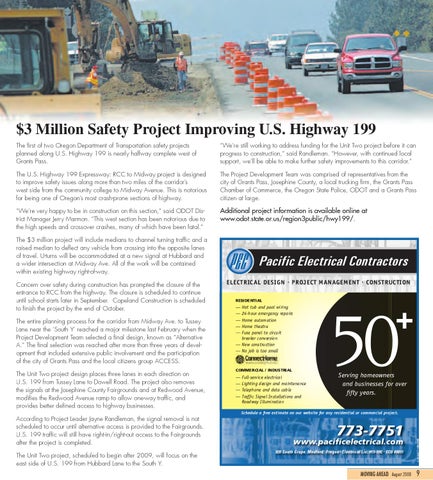